Absolute vs. incremental encoder systems – which one do you need?

Modern optical encoders are divided into two types: incremental and absolute systems. Both are available for linear and rotary axes across a variety of industries. So how does a system designer choose the right encoder for their application? There are several function and performance differences to take into account:

To reference or not? 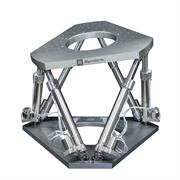 Perhaps the most obvious difference is that absolute varieties do away with need for datum (reference) homing. An absolute encoder does not require a reference return cycle prior to every run, which might be critical for certain applications. There is a time penalty associated with homing and if a machine has multiple axes then homing cycles may be both complex and time consuming. Also, certain types of robots such as hexapods and wafer-handling robot arms risk damage either to themselves or their payload if forced to reference return after a power outage, for example.

A machine controller may typically request position from an absolute encoder every 65 µs (15 kHz), so there is a discrete time interval between each reading. This has implications for highly accurate velocity control, particularly in applications such as DDR motors. Incremental encoder systems produce a continuous sinusoidal output that helps to minimise velocity errors thereby reducing velocity ripple. The ripple effect partly results from the amplification of tiny errors in the encoder output by higher control gains for the purposes of controlling a high stiffness servomotor. In applications such as flexo-graphic printing, e.g. web handling, much emphasis is placed on achieving ‘perfect' velocity control as velocity ripple causes uneven coating and undesirable horizontal bars across the substrate. 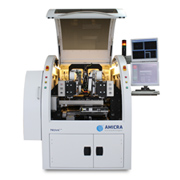 Digital incremental encoders have a maximum speed that is determined by the maximum input frequency (MHz) of the receiving electronics along with the desired resolution. Consequently, as the maximum receiving electronics frequency is fixed any increase in resolution will result in a corresponding decrease in maximum speed and vice versa. Absolute encoders do not suffer from this compromise and allow for both high speed and high resolution operation. This is due to the position being determined on demand and the use of serial communications, allowing designers the freedom to operate at both high speeds and high resolutions. Example applications include pick-and-place machines in the surface-mount technology (SMT) industry, where both higher placement speeds and better accuracy is a continuing trend.

For incremental optical encoders, there are two main sources of cyclic error. One source is a fringe field, produced by a filtering optics scheme, that has harmonics and another comes from electronic sources, including detectors and ICs, that produce lissajous off-sets and ellipticity. Optical regimes can be designed which produce suitably harmonic-free fringe fields. In pure (single-track) absolute systems, the dominant source of cyclic error is aliasing. An alias is a sinusoidal signal that appears identical to another waveform when sampled at the same rate; aliasing becomes problematic whenever a large number of frequencies are passed to a detector. Optical filtering applied to incremental systems minimises this effect, however, absolute systems do not generally employ digital filtering due to increased latency. The aliasing phenomenon typically gives an error of approx. ≤10 µm periodicity in the case of absolute systems and is the result of discrete sampling of the scale period due to the periodic detector; careful design and some optical filtering can minimise this effect such that its related error amplitude is below 10 nm. Well-designed incremental encoders may feature marginally better cyclic error than equivalent absolute systems.

In both incremental and absolute systems, the fundamental causes of jitter are various types of noise (e.g. Shot, Johnson and 1/f)* that occur over a broad spectrum of frequencies. It is possible to reduce the impact of these by filtering to reduce the range of frequencies (bandwidth) that are passed by the encoder to the motion control system. With incremental encoders, where position information is transmitted continuously, this is done by limiting the bandwidth of the (analogue) quadrature signals, which reduces the maximum speed of the encoder (see Speed). For example, the best possible jitter performance from a TONiC™ encoder is achieved by limiting the maximum speed to well below 1 m/s. In absolute systems where position information is acquired at discrete time intervals, position jitter is the uncertainty in each of those measurements. It is not possible to limit bandwidth in the same way, although some digital filtering is possible. The result is that absolute encoders have a slightly larger position jitter than well-tuned incremental systems. For high precision scientific stages requiring very stable position holding with higher stiffness, incremental encoders are generally preferred.

Ultimately, the correct choice of encoder depends on the application. Both systems are capable of high-accuracy, but there is a resolution / speed trade-off as illustrated in the figure.

Renishaw engineers are always available to support system designers in the selection and specification of the optimal encoder solution; please contact us for support.

* Shot noise originates from the discrete nature of electric charge. Shot noise is typical of photon counting in optical devices such as photodetectors.

Johnson noise is the random white noise generated by thermal agitation of electrons in a conductor or electronic device.

Pink (1/f) noise is a signal with a frequency spectrum such that the power spectral density (energy or power per Hz) is inversely proportional to the frequency of the signal. In pink noise, each octave (halving/doubling in frequency) carries an equal amount of noise power.

Hidden costs: why TCO & ROI are important for encoder purchasing

When considering what encoder to choose for an application, a customer may only consider the ‘capital cost' or purchase price. This may be the result of a misunderstanding of the true value of a quality encoder to their process and the relative merits of both incremental and absolute types. When making a purchase decision for an encoder system, buyers /specifiers need to consider the impact of Total Cost of Ownership (TCO) and Return on Investment (ROI) over simply the capital cost. Simply put, TCO is the value of an investment over its entire utilization period and ROI is the gain on the original capital investment over the same period. For encoder systems, these terms may seem novel but can be appropriately illustrated by way of example. In a scenario where an encoder system offers a time advantage during a particular process, the cost benefit can easily be identified. This could be due to an enhanced speed specification but can be simply illustrated by comparing the difference between incremental and absolute encoder systems.

The cost benefit, due to the elimination of homing cycles, of the absolute optical encoder system for a Flat Panel Display (FPD) manufacturing process application, such as FPD manufacture, is shown in the table below. All figures are approximate but representative of the industry average*.

*Assumes 16/7 (double-shift), all year round running. Currency is Pound Sterling.

The main advantage, in this case, of the absolute encoder is that it allows the elimination of homing (reference return) cycles. Absolute encoders, in contrast to incremental types, capture position information on demand and can restart after machine stoppages without first homing to a datum. The overall effect is an average time saving of several seconds per hour, this time saving would also be realised when an encoder system is purchased with superior reliability, upgradability and reduced maintenance requirements. Although a few seconds sounds trivial, the cost implication over the 3 year service life of a 3 axis machine is substantial. A typical FPD factory, in South-East Asia, has perhaps 500 machines and so the total ROI is approx. £0.65 million per factory. By rigorous application of suitable cost benefit analysis to the encoder purchasing decision process, very significant financial gains are possible.

It is important that buyers resist the temptation to view an encoder as simply a commodity purchasing decision. Capital costs may be just the tip of the iceberg.

Open optical linear encoders systems include two main elements; a readhead and a scale. For high-specification motion systems, the method of scale mounting can have a dramatic effect on the behaviour of the system, particularly with respect to thermal performance.

There are two approaches to mounting the scale, termed mastered and floating.

In order to make an informed choice about which system is best employed, the motion system designer must have an understanding of the differences between these two scale mounting methods and their relative advantages/disadvantages in any given positional feedback application.

Mastered scales use some method to rigidly fix the two ends of the scale to the substrate, e.g. epoxy bonded ‘end-clamps', thereby ensuring that the scale and substrate expand and contract axially as one. In other words, the coefficient of thermal expansion (CTE) of the scale is matched or ‘mastered' to that of the substrate. 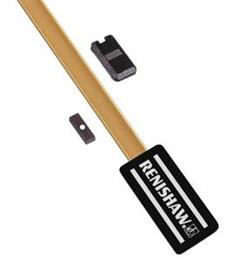 Adhesion of scale to substrate between the end clamps is generally achieved using a compliant double-sided adhesive tape. This ensures that scale linearity performance is maintained as the scale expands or contracts due to temperature changes.

Mastering is only feasible if the scale cross-section and stiffness is significantly lower than that of the substrate so as not to affect its mechanical stability during predicted thermal movement.

The main advantage of this approach is that the thermal behaviour of the scale is easily understood as it matches that of the substrate.

In contrast, floating scales must be mounted in such a way that their thermal movement is independent of the substrate. To accommodate differential thermal expansion between scale and substrate, they may be rigidly fixed to the substrate at one point only, the remaining length being held in place with double-sided adhesive tape, multiple retaining clips or an appropriate scale carrier.

However, whichever fixing method is employed, the so called floating scale is never truly independent of the substrate with respect to thermal expansion. This is because frictional and other effects inevitably lead to positional disturbance and potential hysteresis so the effective CTE is not precisely equal to that of the scale material in its free state. This behaviour can be modelled for floating scale fixing methods (adhesive tape, clips and carrier) to provide design guidance, although in practice compensating for it is not straightforward. However, floating scales can often be made with high accuracy, particularly when made of materials that exhibit very low coefficients of thermal expansion.

Build an encoder system and configure a part number to order

Contact us for a quoteFind your nearest Renishaw office