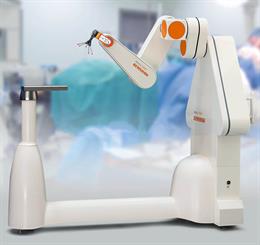 The company will showcase its neuroinspire™ surgical planning software which is often used with its neuromate® stereotactic robot, in stereoelectroencephalography (SEEG) procedures for epilepsy patients.

“Renishaw's neuromate robot can enable the insertion of electrodes into the brain more quickly, consistently and precisely than when performed manually,” explained Campbell, “It may also enable access to regions of the brain that cannot otherwise be reached.

“During this procedure, surgeons can identify the epileptogenic zone from where the epileptic seizures originate and can act to eliminate or reduce the frequency of seizures, by removing a region of the brain. The intention is to improve the quality of life for patients, decreasing their symptoms and enabling them to return to a normal routine.”

Renishaw's neuromate robot can also be used in deep brain stimulation for Parkinson's disease and other neurological movement disorders. 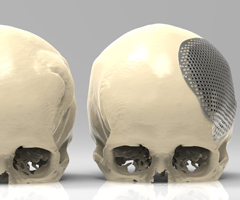 The company will also exhibit its craniomaxillofacial (CMF) implants. Using additive manufacturing, Renishaw can produce patient-specific titanium CMF implants based on data from CT scans, thereby potentially reducing surgery times. At the meeting, Campbell and Littlewood will be discussing the advantages of this process compared to the techniques currently in use.

The SBNS has over 900 members who meet biannually. Renishaw has been attending the meetings for four years, though the Neurological Products Division and Medical and Dental products division attended as a joint exhibition stand for the first-time last year. Surgeons from a variety of disciplines will attend the Autumn meeting, as well as representatives from a range of medical technology companies.

To find out more about the SBNS Autumn meeting visit http://www.sbns.org.uk/index.php/conferences/liverpool-2017/.

For further images, videos, company biographies or information on Renishaw and its products, visit our Media Hub.