The Board of Renishaw plc is pleased to announce the appointment of Dr David Grant, CBE, FREng, FLSW, CEng, FIET as an additional non-executive director with effect from 25 April 2012. 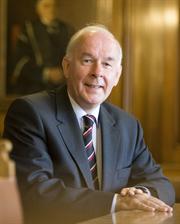 The Board of Renishaw plc is pleased to announce the appointment of Dr David Grant, CBE, FREng, FLSW, CEng, FIET as an additional non-executive director with effect from 25 April 2012.

David, age 64, has been Vice-Chancellor of Cardiff University since 2001, with responsibility for 30,000 students, 6,000 members of staff and an annual income of £430 million. He will be retiring from that post in September 2012. Prior to that he held leadership positions at a number of international engineering companies including Dowty Group and GEC plc where he was Group Technical Director.

He is currently a Governing Board member of the Technology Strategy Board, Chair of the Oversight Committee for ‘Catapult' centres, Chairman of STEMNET, and a board member of the Leadership Foundation for Higher Education. He has been a Vice-President of the Royal Academy of Engineering since 2007.

Commenting on the appointment, Sir David McMurtry, Renishaw's Chairman and Chief Executive said, “I am delighted to welcome David Grant to the board. With his extensive experience in industry as an engineer and his senior positions in research, education and training, David will be a valuable addition to the Company's resources at board level.”