Renishaw features at launch of Made Here Now

One of the biggest scale models of a city ever built using 3D printing formed the backdrop to the launch of a new website which is looking to tell the story of modern-day UK industry. 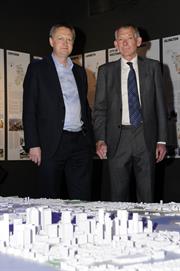 Made Here Now (www.madeherenow.com), the brainchild of former Financial Times Manufacturing Editor Peter Marsh, was unveiled in front of 150 people on April 23rd at a reception at New London Architecture (NLA), London, UK.

A total of 46 organisations, including leading engineering company Renishaw, have already backed the website, which is setting out to educate young people on the career opportunities in manufacturing, influence academics and politicians and change perceptions of Britain's industrial strengths.

The launch event also featured the premiere of a short film by videographer Arabella Itani on UK manufacturing, which focuses on two UK plants run by Renishaw, one of the nation's leading engineering organisations (https://vimeo.com/124810158).

The company gave access to two of its Gloucestershire manufacturing sites to highlight how modern manufacturing facilities are a world away from historic perceptions. The site at Stonehouse is the company's main UK machining facility, whilst its assembly facility at Woodchester, near Stroud, was named the UK's Best Electronics and Electrical Plant in 2012.

Renishaw was represented at the launch by its Head of Communications, Chris Pockett, who said: “There was a great sense of pride at seeing the Renishaw sites feature at the launch event. We were quick to give our support to this initiative which will present a more positive picture of manufacturing in the UK and help shatter outmoded stereotypes that act as a barrier to recruitment.”

Renishaw currently has over 100 vacancies across its 15 UK locations, primarily at its sites in Gloucestershire, Miskin (near Cardiff) and Stone, Staffordshire.

Chris Pockett continued: “It will take many years to change the negative perceptions that have developed in the wider populace, but Made Here Now will make an excellent contribution to the aim of making our sector more appealing to young people, their parents, teachers and other influencers.”

AES, Bentley Motors, Plessey Semiconductors and FormFormForm are the first companies to open their factories to give leading authors and photographers the chance to explore their shopfloors and discover innovations, new technologies and opportunities driving the next revolution.

The Made Here Now reception was attended by a number of high-profile guests from the worlds of industry, economics, design, finance, politics and media. It featured keynote speeches from Author and Commentator Will Hutton and Terry Scuoler, Chief Executive of the EEF, the manufacturer's organisation.

Guests were able to view the 1:2000 model of London that has been commissioned by New London Architecture and built by Pipers, a design and events group with a big model making arm. The installation, which takes up a vast space at the NLA's home in London's Building Centre, shows in massive detail a huge area of the city covering 85 sq km and has a total perimeter of 35 metres.

“We are still very good at making things and manufacturing has immense potential to contribute substantially to our economy,” explained Peter Marsh, who spent more than 20 years as a broadsheet journalist and recently published a book on the New Industrial Revolution.

“However, not enough people are aware of our success stories and one way to improve the growth prospects of UK industry is to find new ways to tell the world about it.”

He continued: “Made Here Now intends to meet this need by using some of the best design, photography and writing to bring the excitement of making things to life.

Mr Marsh concluded: “There's a big appetite for this and the plan is to generate more case studies, articles, pictures and educational resources to ensure Made Here Now is the first place people visit to discover a true picture of 21st century British manufacturing.”

www.madeherenow.com has been designed and built by Manchester-based digital agencies Inventid and Nine Sixty.