Speed up manufacture at MACH 2008

The need for speed

Renishaw is focusing on speed of manufacture at MACH 2008 (stand 5140), with new products and training initiatives that will help businesses to manufacture profitably within the UK, by reducing process times and minimising the cost of poor quality for a wide range of machining and measurement applications.

This contribution to speed is perfectly demonstrated by two very different, but highly successful UK companies that are fighting back against overseas competition through a commitment to the latest technologies, and a tight focus on process control. BK Tooling has just five employees, yet has carved a successful niche in the cut-throat world of mould and pressure die-cast tools. Using Renishaw touch probes to automate part and tool setting, jobs can be changed over rapidly, and costs reduced by maximising machine up-time and eliminating scrap.

A further example is provided by Martin Aerospace, which has recently won a new contract with Rolls-Royce due to it ability to provide high-quality parts at competitive prices. At its Lanarkshire factory the use of high-accuracy Renishaw touch probes and complementary inspection software, has seen floor-to-floor times reduce significantly. This technology has also enabled strict process control regimes to be introduced, allowing the company to maintain very tight tolerances and reduce scrap on complex inconel parts.

A lack of skilled staff is a concern for both exhibitors and visitors involved with MACH 2008. Based on its years of manufacturing experiences, both from its own factory and the many thousands of probing applications at customer sites, Renishaw has developed a training course based around a concept called the Productive Process Pyramid™ (PPP), which aims to help address the UK’s shortage of skilled engineers.

A network of Renishaw Productivity Centres (RPC) will be developed to deliver the courses, where students will be exposed to the principles and practical aspects of the PPP, which is used to systematically identify and controls sources of variation in machining processes, and tackles topics such as design for manufacture, the control of process inputs and environmental stability. The West Midlands Manufacturing Measurement Centre, based within Coventry University, has been announced as the first RPC, and will commence courses in Spring 2008. 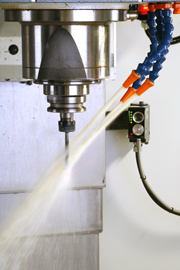 At MACH 2008, Renishaw will showcase a range of new products that contribute towards speed of manufacture. For machine tool applications, the Renishaw TRS2 tool recognition system takes typically less than one second to detect broken tools, whilst for users looking to reduce inspection times by measuring complex 3D part geometries on all sizes of machining centres, Renishaw’s new RMP600 compact, high accuracy touch probe with radio signal transmission, is a powerful solution.

Also being demonstrated at MACH 2008 is Renishaw’s twin-probe system which uses a single optical receiver for tool setting probes together with a spindle-mounted touch probe for component inspection, offering fast integration. This will comprise the OMP40-2 touch probe and Renishaw OTS cable-less tool setter, which is particularly suitable for machines with twin pallets or rotary tables.

For visitors to MACH 2008 looking to optimise machine performance, the Renishaw XL-80 is a compact laser interferometer measurement system which combines portability, performance and ease of use for calibration routines, whilst for CMM users, the revolutionary REVO® five-axis measuring head and probe system can improve inspection throughput levels by up to 900% on machines previously fitted with three-axis scanning systems.

All images and text - copyright Renishaw