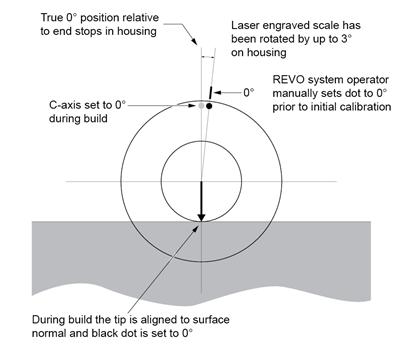 Subsequent measurements rely on the position of the end stop in the housing and a move away from this stop. Due to the incorrect marking of the 0° position with respect to the end stop the result is a misalignment of the tips measurement direction by 3°. This may result in metrology errors.

If a further calibration is performed, the system will again move with respect to the end stop and give a different calibration. This calibration may be more representative as it will be misaligned to the measurement direction by the same amount. It may however still result in metrology errors as it is still nominally misaligned by 3°.

In all cases of head positioning the laser engraved scales will read 'incorrectly'.