CAUTION: Before unpacking and installing the REVO system, the user should carefully read the safety instructions below and ensure that they are followed at all times by all operators.

Operators must be trained in the use and application of the REVO system and accompanying products, in the context of the machine it is fitted to, before being allowed to operate that machine.

Permanent magnets are used in some components of the REVO system and associated products. It is important to keep them away from items which may be affected by magnetic fields, e.g. data storage systems, pacemakers and watches etc.

References are made to features indicated as † and ‡ in the illustrations below. Please ensure that you understand all safety instructions. Familiarisation with the REVO system components is recommended.

These versions of RSP2 and SFP1 have been classified as Class 3R laser products according to EN 60825-1:2007. This classification is based on the laser power that would be emitted in the unlikely event of breakage of the stylus holder, as required by the ‘single fault' criteria in EN 60825-1. In the absence of such a fault, the emitted laser power is negligible.

CAUTION: Do not remove the safety warning labels located on both the RSP2 and SFP1 probe body.

The RSP2 and SFP1 bodies contain embedded Class 3B laser sources, and should not be used in the event of serious damage to, or rupture of, any part of the product. In such cases, IMMEDIATELY disconnect the power source, remove and do not attempt to re-use the parts. Contact your supplier for advice.

Under normal operation, the laser beam is totally enclosed within the probe body and stylus holder body and is inaccessible to the user. Removing the stylus holder breaks two sets of interlock switch contacts, indicated as †, to automatically switch off the laser power and prevent exposure to the beam.

At suitable intervals, the interlock contacts should be inspected and checked to ensure that they are clean and free from airborne contamination, such as dust, debris or swarf. In unlikely circumstances, such contamination could cause a short circuit of the pins and thus increase the risk of sending power to the laser, without a stylus holder being attached. Never connect conducting objects to, or between, the contacts. Follow the cleaning instructions in the maintenance section.

Before inspecting, always remove the RSP2 or SFP1 from the head. Never look directly into the laser aperture, indicated as ‡, whilst the RSP2 or SFP1 body is still connected to the probe head.

In the unlikely event of the stylus holder stem breaking without dislodging the interlocked connection between probe and stylus holder, there is a small risk of exposure to class 3R laser light from the aperture of the broken stylus stem. Direct viewing may cause permanent damage to eyesight and should be avoided. Should breakage occur, avoid looking directly at any emitted or reflected laser light and press the emergency stop button on the hand control unit to avoid unexpected movement. Then manually remove the probe and stylus holder from the REVO head. Once this is done, the machine should be moved manually clear of the part and the damage assessed. Under no circumstances should any attempt be made to repair or re-use the damaged stylus holder. Contact your supplier for advice.

References are made to features indicated as ‡ in the illustrations below. Please ensure that you understand all safety instructions. Familiarisation with the REVO system components is recommended. 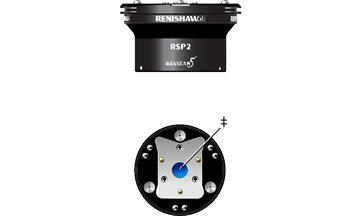 The RSP2 V2 body contains embedded Class 3B laser sources, and should not be used in the event of serious damage to, or rupture of, any part of the product. In such cases, IMMEDIATELY disconnect the power source, remove and do not attempt to re-use the parts. Contact your supplier for advice.

Before inspecting, always remove the RSP2 V2 from the head.

CAUTION: The stylus holder should be replaced as soon as practicably possible.

The RSP3-x scanning probe incorporates embedded high power LED sources and should not be used in the event of serious damage to, or rupture of, any part of the RSP3-x. In such cases IMMEDIATELY disconnect the power source, remove and do not attempt to re-use the parts. Contact your supplier for advice.

The method of interrupting power is to disconnect the power cable or turn off the supply.

Air supply pressure at the input to the air filters should be a maximum of 8.5 bar. Please observe normal compressed air precautions.

General operation and maintenance
The product is only to be used with the Renishaw UCC2-2 controller.
It is recommended that the power is removed before performing any maintenance operations.

Maintenance is restricted to procedures described in the maintenance section.

Care should be taken to ensure that the laser aperture windows, indicated as ‡, located on the RSP2, RSP2 V2, SFP1 and the mating stylus holders, do not become damaged as they are made of glass and could cause injury if broken.

CAUTION: Use of controls or adjustments or performance of procedures other than those specified herein may result in hazardous radiation exposure.