If a trigger event occurs during joystick operation, the CMM will stop and back away from the surface along the vector that it was travelling. After the back off operation, it is necessary for the joystick to return to its null position for a set period of time before the joystick will permit movement of the CMM. The default value is 0.05 seconds*. The back-off speeds and distances are defined by the UCC configuration settings*.

* These values and configuration settings will have been set by your CMM service provider.

When in orbital mode (LED lit) the head and machine move relative to the stylus ball. 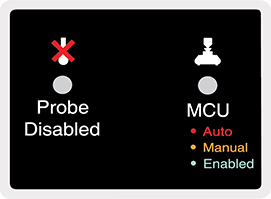 The left LED indicates that the probe is disabled. In this mode, if the stylus is driven into a surface the CMM will NOT stop.

The right LED indicates that the joystick is enabled i.e. the joystick will move the CMM or head when deflected.

Place the stylus into a bore and press the 'joystick enable' and 'bore teach' buttons simultaneously:

If the 'head mode' and 'bore teach' buttons are pressed simultaneously the bore is measured with head touches (PH20 and REVO / RSP2 only):

These permit the locking of one or more axes of the CMM, ignoring any joystick deflections for that axis.  On each of the axis lock buttons there is an LED indicator that will light red when the respective axis is locked. On the MCU display there will also be a padlock symbol next to the respective axis (see below).  These buttons toggle the lock on / off.

NOTE: If an axis lock is released when the joystick is deflected, that axis is immediately free to move.

NOTE: When the CMM joystick orientation function is operated, the axis locks will be transposed on the MCU.

When the MCU is in head mode, the axis locks are applied to the relevant head axes.  When the joystick is in head mode and a REVO / REVO-2 / PH20 head is fitted, the left / right axis lock button is used to initialise and cancel ‘SNAP ON'. ‘SNAP ON' is the ability to move the head to the nearest multiple of a defined head angle.  In UCCassist-2 the variable can be set to define the resolution of manual head moves (e.g. 5°).  These axis locks will only be active during manual (MCU) controlled CMM movements.  When the CMM is under DCC (direct computer control) operation, all axis locks will be released and re-latched when returning to manual operation.

This button is designed to allow the user to record or cancel chosen machine positions.  When a program is being generated by the teach and learn method, the take point button is used to permit the CMM to record a waypoint and use it in the program.  Use of the cancel point button will indicate to the application software that the point just taken (either a touch point or a position generated by the take point button) should be removed from the program.  The cancelling process can be repeated many times and the front-end program will use it to delete multiple stored points.

NOTE: When the take point button is pressed, the machine's XYZ position will be recorded and a waypoint created.

The axis select button changes the CMM motion in any one of three different axis systems - machine, part or stylus:

In this axis system, the joystick directly controls the machine axes, i.e. a forward deflection of the joystick produces a pure Y+ movement of the CMM.  This is the default machine setting when the machine is initialised.

In this axis system, the joystick controls the machine within the current part axis system. i.e. a forward deflection of the joystick produces a movement in the part Y+ direction.  This could be a compound of two or three machine axes.

In this axis system, the joystick controls the machine axes in the axis system of the selected stylus. i.e. a twist (Z) deflection of the joystick produces a movement along the axis of the probe stylus.  This could be a compound of two or three machine axes.  The stylus axis is a secondary part co-ordinate system, applicable only to the MCU joystick, and this needs to be updated by the application software to reflect the active stylus axis.

To change to the required axis system the axis select button must be pressed and held on the desired axis system.  This selection is confirmed by simultaneously pressing the joystick enable switch.  Both switches can then be released.  This change procedure prevents unintentional changing of the axis system which could give unexpected machine movement.

NOTE: When switching the system to CMM auto mode, the joystick orientation feature will drop out and then be reasserted when the system is placed into CMM manual mode.

When head mode is active and this button is pressed, joystick deflection rotates the CMM around the stylus tip.

This button switches between CMM and rotary table operation.

If there is no rotary table this button has no effect.  The rotary table is set up during commissioning in UCCassist-2.

The application software can define the function buttons. Their status can be read at any time and in any mode. These buttons have no effect on the UCC controller as they are solely for the use of the front-end software. The associated keypad LEDs can also be switched on and off at any time.  For example, one of the buttons may be used to initiate a circle measurement command when the system is in a manual mode and is being used for teach and learn programming.

The engage button gives the CMM user the ability to engage or disengage the servos whilst the CMM is in manual mode.  This button is configured as a toggle switch and has an associated LED to indicate the servo status.  The LED identifies the various operational states as listed below.  A symbol at the top of the LCD screen (shown below) also indicates whether the servos are engaged. 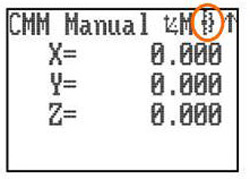 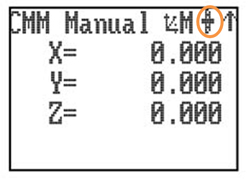 LED off - The CMM servos are disengaged.

LED amber - The servos are in the process of engaging.

LED red - The servos are engaged but the joystick is not enabled.

LED green - The servos are engaged and the joystick is enabled and ready.

Operating the disengage switch disengages only the CMM axes, it does not disengage the REVO or PH20.

The STOP button gives the operator the ability to rapidly stop the CMM, REVO head and PH20 without disengaging. When the CMM has stopped, the system stays in hold state with both the CMM and head engaged.

This is the yellow or grey STOP button mounted on the MCU W-2 joystick, or the grey button on the MCU5-2. When this button is pressed, all CMM and motorised head motion is halted.

A red or grey emergency STOP switch is mounted on the MCUlite-2, MCU5-2 and on the MCU W-2 cradle which is hard wired to the UCC controller.  It complies with EN13850 and when connected to a UCC / SPA the system can comply as either a category 2 or category B E-STOP system as defined in EN954-1:1996 (ISO13849-1:1999).  When this switch is operated power to all the CMM axes is removed.

Speed override controls the machine speed when the CMM is running a program under DCC mode.  It will also control the speed of the REVO head or PH20 if fitted.  The LCD screen displays a percentage value of the programmed move speed when in DCC operation as shown below.  If the speed override is set to less than 10%, the speed percentage shown on the LCD display will flash.

The probe disable button gives the CMM user the ability to move the CMM while the probe is triggered or disconnected by disabling the probe trigger signal.

WARNING: When operating in this mode the probe is disabled and therefore probe contact with a surface will NOT stop the CMM. No measured data will be returned to the CMM host computer.

If the joystick has not been used for 60 seconds, the back light turns off.

To activate the screen back light press the joystick enable button.