Fit an M8-threaded non-autojointed CMM touch-trigger probe to a manual probe head as described below:

The S1 'C' spanner is designed to break before any damage can occur to either the probe or the probe head due to over-tightening the probe. 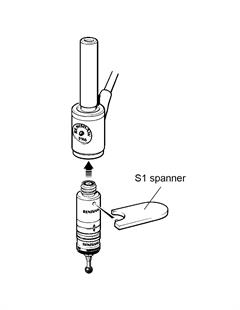 The repeatability of the Renishaw autojoint ensures that a probe need only be qualified once. The qualification data can then be recalled whenever the probe is re-attached.

Fit an autojointed CMM touch-trigger probe or PAA series adaptor to a manual probe head as described below:

1. Check that the locking cam on the autojointed probe is in the unlocked position (the slot is horizontal).

2. Offer up the autojointed probe to the PH6M, ensuring that the alignment marks on both the probe and the probe head are correctly aligned.

NOTE: If the TP6A touch-trigger probe is to be used in conjunction with the Renishaw autochange system, the TP6A should be locked to the probe head by rotating the cam fully clockwise and then reversing it by 5°.

3. Insert the S10 joint key into the cam of the autojointed probe and rotate clockwise (120°) to lock the probe to the probe head. 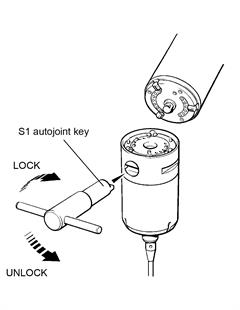 Attaching a shank to a manual probe head (except PH6)

Renishaw products may incorporate either three or four tapped holes to facilitate fitting a shank. Renishaw shanks are supplied with five holes to allow either three-hole or four-hole products to be fitted to them.

Attach a Renishaw shank to a Renishaw manual probe head as described below: 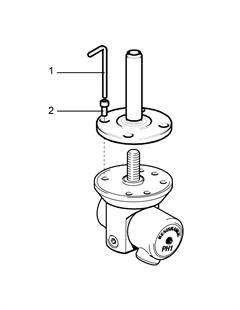 The pin configuration and outputs are detailed below.

The PH6 has an integral cable and connector. This will conform to the CMM manufacturer's specification. If the connector on the attached cable has a 5-pin DIN connection then, subject to external verification, the cable pin outputs will be as specified below.

The PH6M is fitted with an integral 15-pin micro ‘D' socket. If required, this socket can be adapted by using a suitable cable to which a 5-pin DIN socket has been fitted.

Connecting a manual probe head electrically to a CMM