The SCR200 may be operated in either of two modes depending on the application requirements and whether the SCR200 is accessible in normal operation.

With TAMPER PROOF ON selected, the stylus change cycle is initiated by moving the probe across the face of the Hall sensor, for the rack to detect the presence of the probe before entering a docking port. In this mode, interruption of the light beams alone does not inhibit probe triggering and therefore the probe cannot be accidentally inhibited during normal operation. For example by placing fingers in the light beam or by operating a port lid.

With TAMPER PROOF OFF selected, direct entry to the rack ports is allowed. The light beams detect the probe entering a module docking port and inhibit probe triggers. In this mode faster stylus changing is possible but Renishaw recommend that it is used only in situations where access to the rack is restricted when the CMM is operating automatically.

To select the operating mode

Renishaw recommends that the stylus modules are mounted on the probe body by hand. An automatic stylus change routine is completed prior to tip qualification then the stylus module is loaded into the rack.

The CMM should be used to load the stylus modules into the rack by following the 'Stylus module changing procedure'.

It is possible to load the rack by hand but care must be taken to ensure correct rotational alignment, as there is no warning if a module is incorrectly seated on the probe sensor and gross measurement errors will occur.

Two LEDs are located on the top face of the rack:

Refer to the 'Datuming the SCR200 rack' section for definitions of coordinate X(n), Y, Z.

NOTE: If the stylus assembly has an offset or star component projecting along the Y+ axis, it is permissible (after step 1) to move out along the Y- axis and exit the light beam for a maximum of 5 s, to avoid a collision with the SCR200 leg or another stored stylus.

Refer to the previous procedure ('Storing a stylus module - tamper proof ON') omitting steps 1 and 2.

NOTE: It is not necessary to stop CMM motion at the start coordinate in this mode, provided that the port is entered along the Y+ axis at the specified X(n) and Z axis positions. 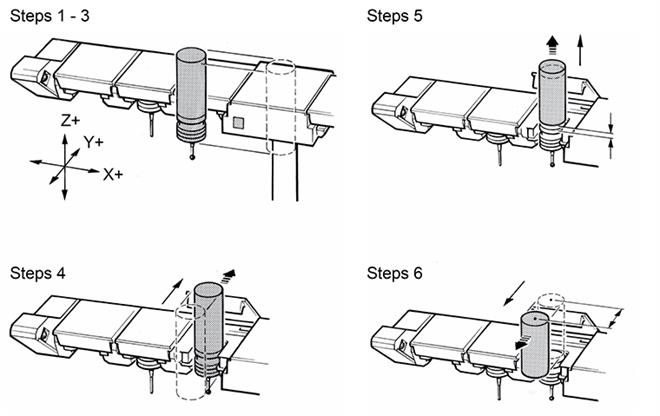 Picking up a stylus module

This procedure is applicable to both operating modes. Refer to the section 'Datuming the SCR200 rack' for definitions of coordinate X(n), Y, Z.

Proceed with the part measurement program. 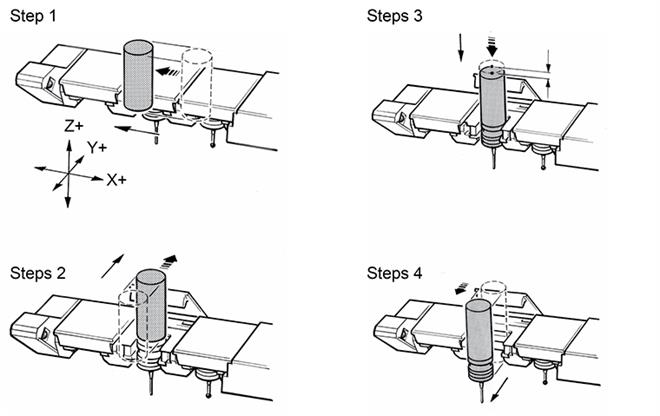