The TP200 probe has two normal operating states - armed or triggered.  The probe should be in the armed state except for the moments when the stylus is deflected against the workpiece.

When the probe is armed (sometimes called ‘seated' or ‘reset') the following PI 200-3 front panel indicators will be ON:

Additionally, the probe head LED will be ON and the LEDs on the TP200 probe body will be OFF. The probe LEDs may sometimes glow slightly, indicating a low level of background vibration.

When the stylus touches the workpiece the LEDs on the probe body turn ON brightly. The SEATED and probe head LEDs will turn OFF.

The probe should be allowed to remain in the triggered state only for the minimum time necessary to reverse the CMM motion and back-off from the workpiece.

If the probe remains in the triggered state for more than 10 seconds, drift of the stylus zero reference position will occur and the PI 200-3 will emit an audible warning. Back-off the probe from the workpiece and refer to 'Resetting the probe'.

Ensure the CMM will remain stationary, in a safe condition.

To fit another module, refer to the 'Mounting the stylus module to the probe body' section.

When using MH8 or MIH probe heads, unlock and relock the head before resetting the probe.

Reset the probe, refer to the 'Resetting the probe' section.

Operation with a manual probe head

After manually re-orientating the probe when using PH1, MH8 or MIH probe heads, reset the probe. Refer to the 'Resetting the probe' section.

The SF module is satisfactory for the majority of applications and provides the maximum stylus carrying capability.

The LF module should be employed where the application necessitates the use of styli with ball diameters less than 1 mm, particularly the PS29R (Renishaw part number A-5000-7800), or where lower overtravel force will reduce the risk of marking or deflecting the surface of the workpiece.

The EO module is recommended for use when increasing the speed of the CMM may lead to stopping distances which exceed the overtravel range provided in the SF / LF modules.

Note that the overtravel force, in the X-Y axis, varies with both direction and displacement for a given stylus length. In the X-Y axis there is a pattern of three maximum and minimum force directions as illustrated in figure below. 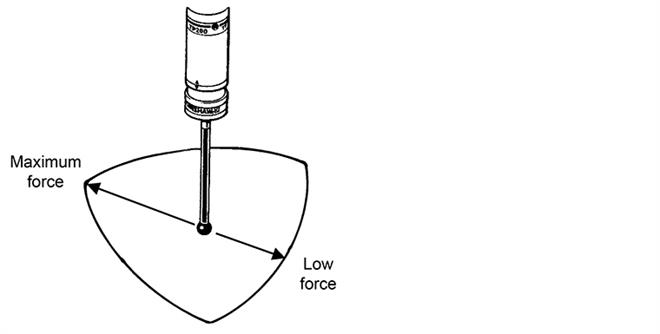 To obtain the best performance apply the following considerations when selecting and fitting a stylus:

The absolute maximum stylus carrying ability of the TP200 probe is determined by the mass of the stylus and the distance from the stylus holder to the centre of gravity. The limits are:-

In practice, the stylus carrying is restricted by CMM vibration level, probe orientation and CMM controller flexibility. The recommended limits are given in the figures below.

It may be possible to exceed the recommended limits but the user is advised to conduct trials to establish the suitability for the application and the effect on measuring performance. 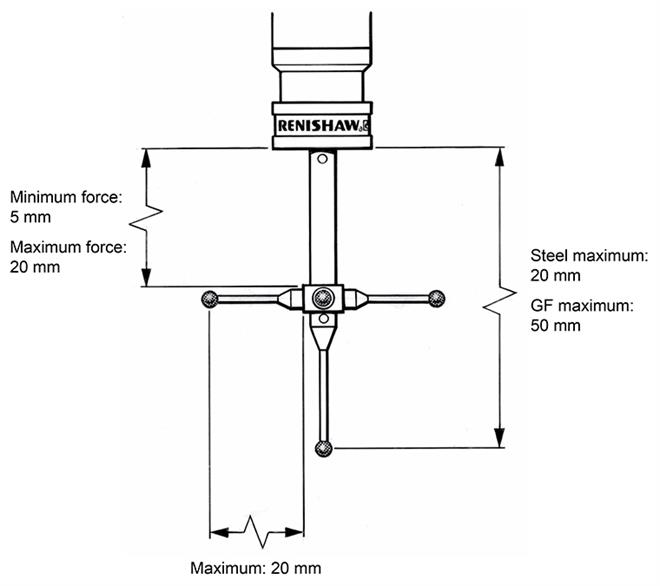 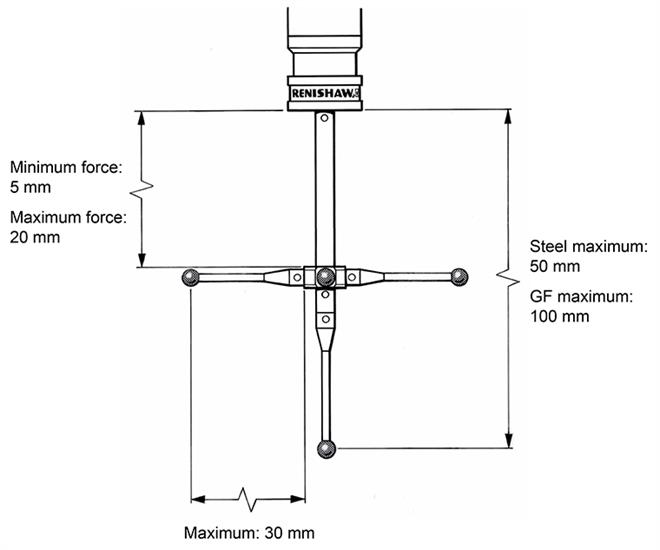 Under certain conditions, vibration may cause false ‘air' triggers during gauging and it may be necessary to reduce the probe sensitivity. False triggers may occur when large or heavy stylus arrangements are used, or where there is floor transmission from nearby machinery or vehicles.

The trigger level is selected by switch 10 on the rear panel of the PI 200-3 interface:

The trigger level selection does not affect sensitivity when the probe is in damped mode.

Please consult your CMM supplier before making any adjustment to the PI 200-3 settings.

All stylus tips must be re-qualified after changing the trigger level.