For linear brushless motors the axis scale cables must be connected to the UCC BI scale connector. The UCC BI will transmit the scale feedback information to the SPA2-2 over the SPA2-2 comms connection.

For rotary brushless motors the motor encoder cables must be connected to the encoder connectors on the SPA2-2.

Most of the commissioning sequence is the same as conventional brushed motors, the differences are detailed in the following section.

The SPA configuration screen has additional parameters that are only configurable when ‘motor type' is set to ‘brushless'. 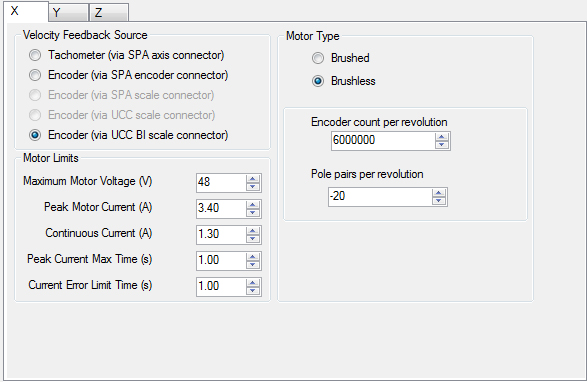 NOTE: the term ‘revolution' is applicable to both rotary and linear motors as a linear motor can be envisaged as a rotary motor that has been rolled out flat.

This parameter sets the number of pole pairs in one revolution of the motor.

A linear brushless motor has north and south poles laid out alternately:

The above image contains 5 pole pairs.

It is unlikely that the number of pole pairs in a rotary brushless motor can be determined without opening the motor casing, therefore the motor manufacturer's specification must be used.

Unless the polarity of “pole pairs per revolution” is known from an identical machine it can only be determined by using the ‘configure motor, scale and feedback polarity' action in the machine commissioning sequence.

For rotary brushless motors the accuracy of this value is critical so it must come from the motor manufacturer's specification. It would very difficult to count the exact number of counts per revolution and any error would be compounded over multiple revolutions.

If ‘length per pole pair' is known from the motor specification it can be used to calculate encoder counts per revolution.

If the motor specification for “length per pole pair” cannot be obtained it can be calculated for linear motors by measuring the length of as many pole pairs as possible, ideally the distance from the start of the first pole to the end of the last pole. A small amount of measurement error (i.e. 1 mm or 2 mm) is acceptable if the measurement is over many pole pairs.

The battery box test for a brushed motor finds:

The battery box test for brushless motor will also find:

Running the battery box test is very similar to commissioning conventional brushed motor machines. The difference is that the dialog box that is displayed to the user after each run completes now has a checkbox called “Flip poles per rev polarity each time the test is run”. If this box is checked, the polarity of “number of pole pairs” will be inverted on the next run. 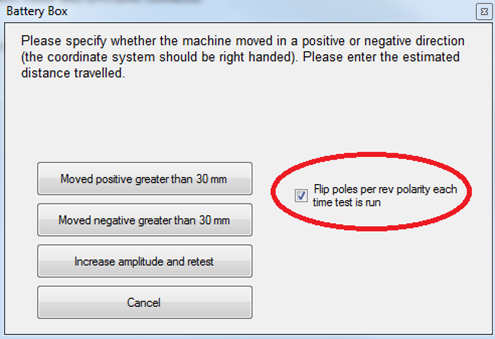 If there is concern that the commutation angle finding routine performed during "configure for motion" is giving inconsistent results it is possible to configure the system to apply a known (i.e. previously found) commutation angle after the axes have been homed. UCCassist-2 does not provide a commissioning interface for this functionality so the user must contact CMM support for further information.