To obtain the best possible performance from your TP20 probe, it is important to select the correct probe module for your specific application. When choosing the probe module to be used, the following considerations should be addressed:

The following probe modules are available for use with the TP20 probe. Each probe module is clearly marked on its front ring and also carries a colour-coded front cap as follows:

NOTE: It is recommended that a standard force probe module is always used, except where the application or machine acceleration or vibration would cause the TP20 to false trigger.

The low force probe module, identified by a green cap, is suited to applications that require a low trigger force, for example rubber seals.

The standard force probe modules (SF, EM1 STD and EM2 STD) are identified by black caps and are suited to the majority of applications.

The medium force probe module, identified by a grey cap, is provided for use where a higher trigger force than standard is required.

The extended force probe module is identified by a brown cap. Typically, this probe module will only be required with large stylus assemblies, and where spurious triggers caused by machine vibration and acceleration preclude the use of either the standard or medium force probe modules.

The 6-way probe module is identified by a blue cap. This probe module is designed for 6-way operation where there is a requirement to measure in the –Z direction, for example when measuring undercuts.

NOTE: Choosing the best stylus for a given application is an important factor in achieving optimum probe performance. For further information on the full range of Renishaw styli, please refer to Renishaw's styli and accessories brochure (H 1000-3200) which can be ordered from your supplier or downloaded from Renishaw's web site, www.renishaw.com.

When selecting a stylus, it is important that the stylus length is kept to the minimum required to access all features to be measured, and that the stylus type offers the maximum possible stiffness. Factors that affect stiffness are:

It is also important to ensure that the stylus ball diameter chosen is as large as is practical. This not only ensures that the stylus will be as stiff as possible, but also reduces the stylus's susceptibility to surface form and surface finish.

Owing to the modular construction of the TP20, when selecting and using styli the following criteria should be applied:

Owing to the modular construction of the TP20 probe, it is recommended that the limits shown in the figures below are applied when selecting styli to be used.

The standard force probe modules (SF, EM1 STD and EM2 STD) can be used with the following range of styli: 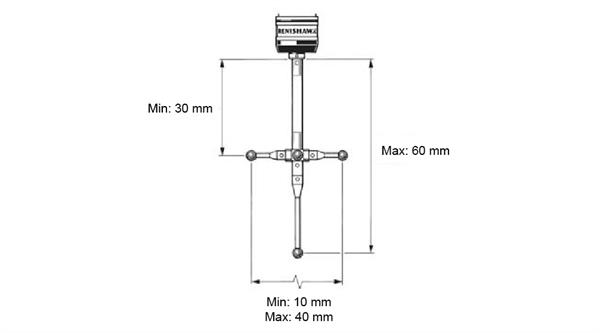 The recommended stylus limits for the 6-way probe module are: 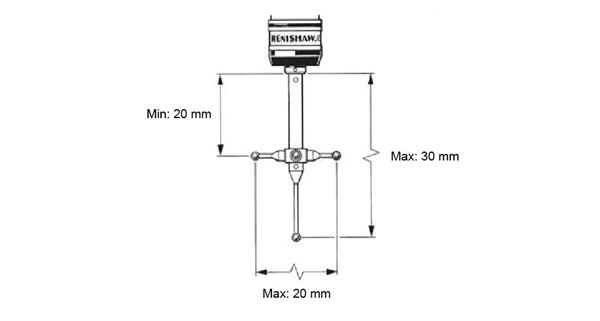 A comparison of the minimum and maximum stylus lengths for use with each probe module is shown in the following figure: 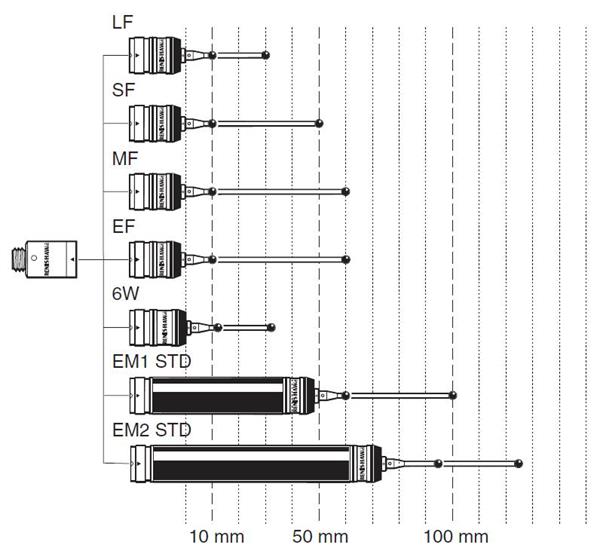