When using long styli fitted to the EM1 STD or EM2 STD probe modules, do not store them in ports three or four of the MCR20 or MSR1 rack.

The recommended safe clearance position is located at the minimum distance from the port centre (at docking height Z) where the probe will be armed, if the probe module is attached.

The safe clearance position for any port (n) can be calculated from:

To store a probe module, carry out the following procedure:

Step 2.- Move to the docking target co-ordinate for port (n) along the Y-axis at the docking height (Z).

Step 4.- Withdraw from the release co-ordinate, maintaining the release height, along the Y-axis to a point clear of the port lids where the probe remains inhibited. This point is known as the ‘retract point' (RP) and has the co-ordinates: {RP = Xn, Yr, Zr} where Yr = Y – 17.2 mm 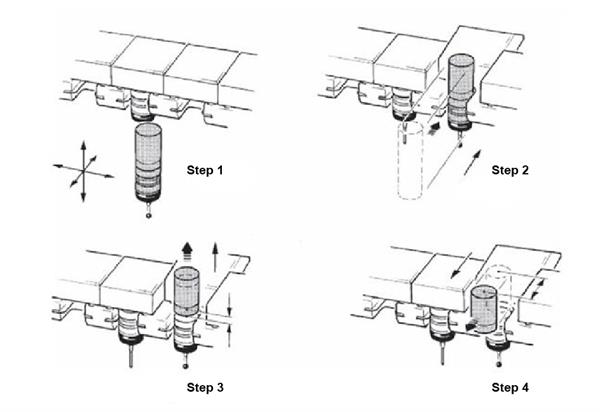 Picking up a stored probe module

To pick up a stored probe module, carry out the following procedure:

Step 1.- Move along the X-axis in the direction necessary to arrive at the RP co-ordinates for the next port required.

Step 2.- Move along the Y-axis to the release co-ordinates above the centre of port Xn, Y, Zr.

Step 3.- Move down to the docking co-ordinates Xn, Y, Z to attach the probe module.

Step 4.- Withdraw along the Y-axis to the clearance position at co-ordinates Xn, Ys, Z. 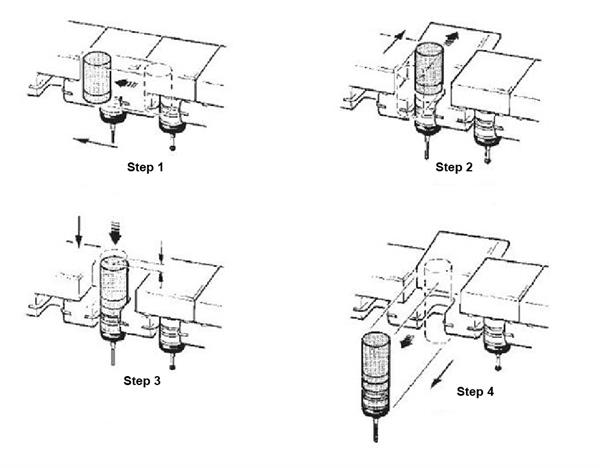 * = No change to the previous setting of the axis register

The location points for the TP20 probe modules are positioned approximately below the numbered labels on the rack. Accurate positioning is not necessary, as the magnetic force will pull them into the correct position.

The probe modules are held magnetically in the MSR1 and can be rotated if required.