The Guardian – saving lives with compact, simple and reliable technology

“A robot may not injure a human being or, through inaction, allow a human being to come to harm,” states the science fiction writer Isaac Asimov's first law of robotics. When penned in 1942, the author optimistically assumed that the robot in question would have a consciousness similar to that of humans. His vision of future-mankind's mechanical slave has yet to become reality but robots are helping to protect and save human lives every day, albeit without a potentially troublesome sense of self.

For accuracy and convention, AB Precision (ABP) prefers to call its Guardian a vehicle (as in MROV - Miniature Remotely Operated Vehicle) rather than a robot but names aside, the Poole, Dorset based engineering company's quad-tracked, articulated creation excels with its dexterity and manoeuvrability. Its network of ten Renishaw non-contact encoders provide absolute positional feedback to a CPU. On a remote control, at a safe distance from whatever hazard is being dealt with, the operator is able to see a live, rotating graphical representation. When viewed alongside images from four on-board video cameras, Guardian can be operated out of sight and in constricted spaces.

“The vehicle has several moveable parts,” says ABP's Explosive Ordnance Disposal (EOD) project manager Cindy Barfoot, “including the base, which is a turntable. You can also raise, lower, extend and retract the main arm, pan and tilt, plus tilt the camera and the onboard weapon, both of which can move independently.” Guardian can climb stairs; reach under or inside vehicles or stand over 2.6 meters high on ‘tip-toe'. It has bi-directional audio capability, traction control and is sufficiently narrow to move down aircraft and train aisles.

The on-board Renishaw rotary encoders detect the positions of all articulated components of the arm and track mechanisms, with the data being sent via a continuous telemetry stream back to the base station control. ABP's proprietary software prevents further movement if two parts of the vehicle are about to collide.
Guardian may not have the gift of introspection, but thanks to Renishaw encoders its spatial ‘awareness' is about as advanced as an electromechanical system can be. Nigel Peter is the Guardian project engineer and the man responsible for specifying Renishaw components.

“Angular position sensing on the vehicle is achieved using a Renishaw AM512 magnetic sensor. We also use RMB20 high-speed rotary magnetic encoders in modular format, which makes them very easy to integrate.”

All of the Renishaw encoders are physically small enough to use where space is at a premium and, at the same time are robust, simple and reliable; important considerations for a vehicle designed to be used in hostile and corrosive environments.

“They are also very easy to interface to our data collection PICs,” continues Mr. Peter, “and because they are non-contact, they provide seamless feedback through 360° of movement. The AM512 sensors are mounted directly to our controller PCBs, so no wiring is required, reducing cost and increasing reliability.” 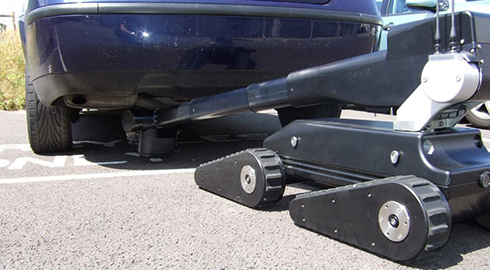 A variety of tools, including water jets and x-ray

The result is a remote, ‘intelligent' limb with full vision, capable of carrying and using a variety of tools, depending upon the application. In bomb disposal situations, it's armed with a disruptor - referred to as a weapon - which can fire a jet of very high-pressure water to neutralise a device.

“The water jet is used to disable the circuitry controlling an explosive device and renders it safe but without destroying the forensic evidence. We can mount up to four different disruptors or other weapons on a single vehicle. In nuclear, biological or chemical applications, these disruptors can be replaced with handling devices or sensors.”

The new MROV embodies everything the company has learnt since it introduced its first vehicle - the extremely successful Cyclops – which was arguably the inspiration for almost all, similar robots designed and developed in Europe over the last 20 years or more.

“We decided to build a new vehicle from scratch”, said Mr Peter. Apart from anything else, Guardian looks completely different from Cyclops and from other vehicles available. However, its clean lines and high-quality finishes are more than just show. They also make for quick and easy decontamination when deployed in toxic, contaminating and radioactive environments. He continued, “We have an ex-bomb disposal expert on the AB staff. He gave us a lot of insight and the experience to design a vehicle with as many useful features as possible. We're also able to customise the design if necessary. For example, some operators want the control mounted in a backpack.”

In his Foundation novels, Asimov's first law became the philosophy of Gaia, a fictional planet with a collective consciousness: Gaia may not harm life or, through inaction, allow life to come to harm. Replace Gaia with AB Precision and you have what amounts to the EOD department's core values. Guardian, it would seem, is a very appropriate name for the embodiment of those values. Its existence will protect and safeguard many lives.