“The AM custom stylus’ impact on productivity has been profound”

A move to Renishaw's Equator™ 300 automated gauging system gave Linex Manufacturing all the inspection speed and accuracy it needed. However, on a project implemented before the larger Equator™ 500 was available, bolt holes on the extremities of a workpiece lay just outside the gauge's working envelope. When standard styli and stylus extensions could not reach, an additively manufactured custom stylus provided the answer.

Linex Manufacturing is a division of Linamar Corporation, one of the world's leading automotive parts manufacturers, which uses multiple Equator flexible gauges at many global production plants. At its base in Ontario, Canada, Linex produces a range of precision-machined automotive components.

Its core business lies in the production of automatic transmission components used in medium- and heavy-duty commercial vehicles. Its customers are global transmission manufacturers, and production volumes are high.

Capable of component scanning speeds in excess of 200 mm/s and maintaining high accuracy over the temperature range of 5 C to 50 C, the Equator 300 provided Linex Manufacturing with a versatile diametric inspection volume of 300 mm to a height of 150 mm, capable of supporting workpiece weights up to 25 kg.

Since this project, Linex became the first company in Canada to operate Renishaw's Equator 500, an automated gauging system with an even bigger working envelope, inspecting automotive workpieces up to four times heavier. 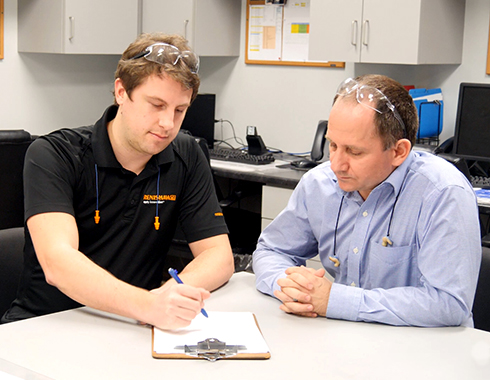 Narcis Georgescu, Senior Quality Supervisor at Linex Manufacturing, explained one unexpected challenge, “For one component in particular - a front support assembly - we needed to closely inspect a series of 11 mm bolt holes required for mating to another component. Precision was paramount, and they had to be inspected thoroughly. The challenge we faced was that these bolt holes lay just outside of the Equator 300 working envelope.”

“Initially, to overcome this challenge, a unique L-shaped tool configuration was produced with multiple components that could help extend this volume and provide us with the inspection access we needed. While it seemed to worked well, over time, it was causing an unexpected measurement uncertainty."

Thorough metrological testing of the Equator system carried out with Renishaw engineers verified the repeatability of the gauge itself. It confirmed the need for a robust stylus construction for specifically inspecting the bolt holes.

Determining that a probing setup using multiple components did not provide the necessary rigidity, Renishaw proposed the development of a custom stylus using metal additive manufacturing (AM), also known as metal 3D printing.

Conceived digitally in 3D CAD software and printed at Renishaw's Solutions Centre in Ontario, Canada, an elegant Z-shaped stylus was produced as a single-piece monolithic construction with internal latticework to reduce its weight and avoid the risk of false triggers.

The introduction of the custom-designed, additively manufactured stylus brought Linex the accuracy and repeatability it needed to inspect component bolt holes outside the Equator 300 gauge's working envelope.

Narcis Georgescu said, “Thanks to its robust, one-piece design, the titanium 3D printed stylus has enabled us to carry out full component inspections. It brings a combination of lightness and stiffness that we could not achieve.”

A few years on and the original AM stylus is still running without any degradation in its performance. Linex purchased a second stylus in the exact same design, and the company is now operating six Equator 300 gauges and one larger Equator 500 gauge.

The AM stylus' impact on productivity has been profound. It means that we now have complete assurance that we will avoid any costly rejections, due to either bolt hole size or position being out of spec. Now we have accuracy and repeatability in our bolt hole inspections that remain within acceptable limits and irrespective of ambient conditions, stability stays within a 5% limit.