Metal additive manufacturing technology from Renishaw has enabled Robot Bike Co. to produce a novel design of mountain bike that can be customised to match the size and riding style of the rider.

The Robot Bike Co. story started in the late 1990s when Ed Haythornwaite met two other bike-mad students, Ben Farmer and Ben Arnold, at Bath University. “We spent far too much time riding bikes,” remembered Ed. “When we weren't riding bikes, we were talking about bikes and how they could be made better than anything then on the market.”

In 2012, Ben Farmer had the ‘lightbulb' moment, when he came up with the basis for the novel design that Robot Bike Co. is now producing. He took ideas from his background in the composites industry and in the world of additive manufacturing, and came up with the concept of using the two technologies to make the ‘ultimate' bike that the friends had talked about when they were students.

While Ben Farmer had gained some background in additive manufacturing, he knew that he needed someone with more in-depth knowledge to bring the project to reality. He invited Andy Hawkins, who he had met while he had been working at Airbus, to become the fourth partner in the company. 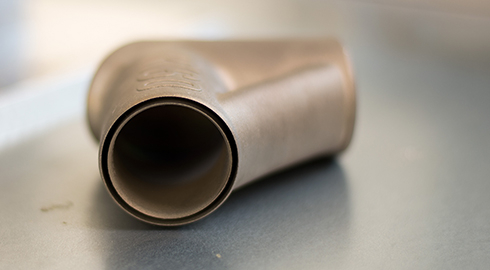 Most high-end mountain bikes have frames made from carbon fibre-reinforced resins. Because the frames have to be moulded, even the most expensive mountain bikes are normally available in only two or three sizes.

Unless the rider is very lucky, they have to compromise on the size of their bike, one of the most important aspects determining its performance and the quality of the ride. In contrast, Robot Bike Co. produces every one of its mountain bikes specifically for a customer. The angles used in the design of the titanium joints are varied, together with changes in the lengths of the sections of tubing, to produce a unique bike configuration to match the size of the individual customer.

It was clear that additive manufacturing would be the only way to produce the wide variety of unique parts needed for each of the bespoke mountain bikes. However, the titanium components needed to be robust enough to withstand the demands of extended use under constantly varying loads, be as light as possible to give the optimum ride, and be able to be bonded reliably to the tubing. 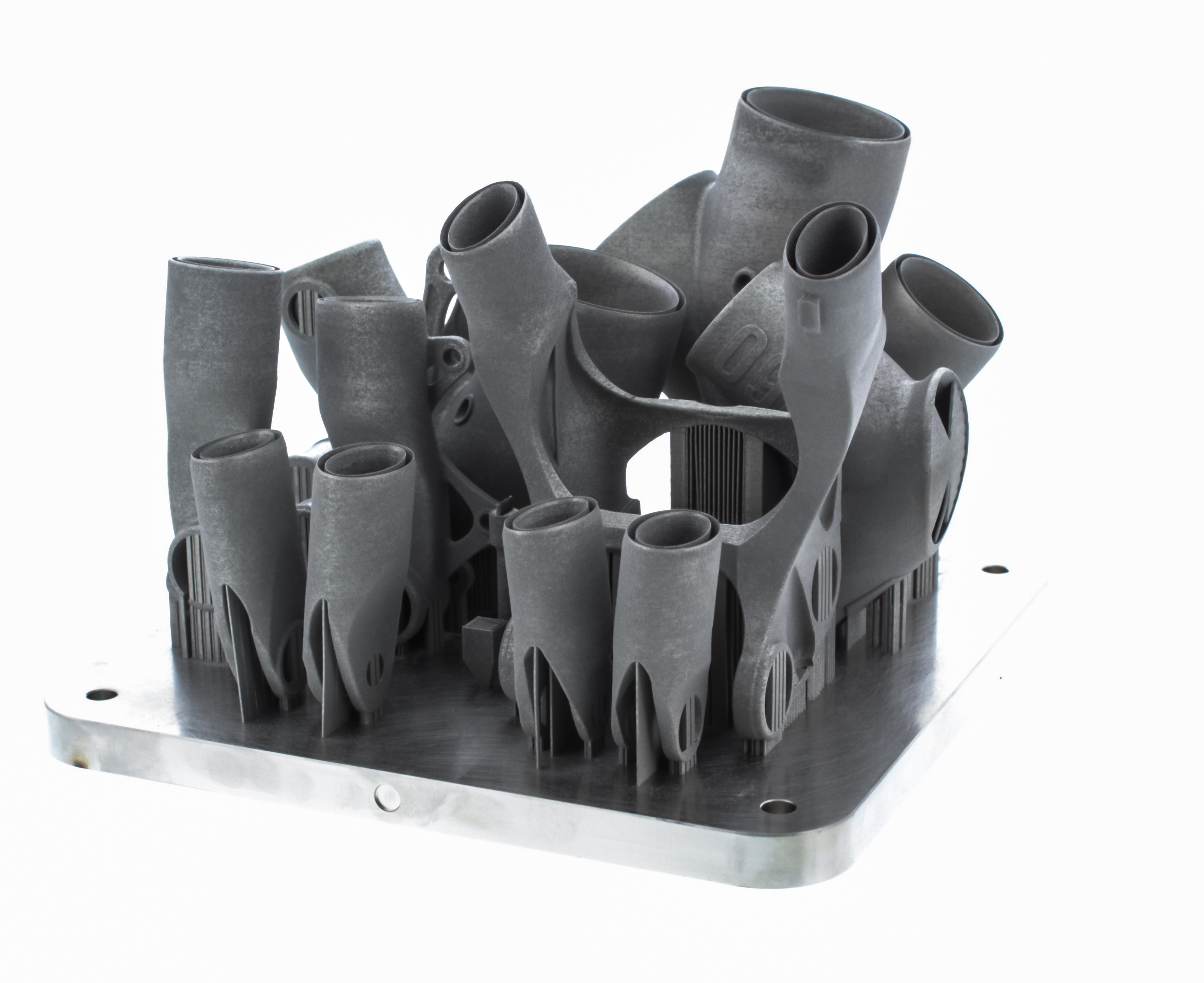 The use of Renishaw's additive manufacturing equipment means that thinner walls with much greater control over wall thickness tapering can be achieved than if the parts were machined or cast. For the rider, this translates into a strong, lightweight, customised and reliable frame.

To turn the new design concept into reality, Robot Bike Co. entered into partnerships with Altair, HiETA and Renishaw. Work with Altair allowed the design approach to be finalised using the company's expertise in topology optimisation, a mathematical approach that optimises material layout within a given space, for a given set of loads and boundary conditions, to provide the lightest weight design possible. Topology optimisation is a perfect fit with additive manufacturing as, for the first time, many of the extreme design concepts generated by the software can actually be manufactured.

At the same time as the frame design was being optimised, Robot Bike Co. used its relationship with HiETA to develop the methodology needed to create the optimum bike design for each customer. Together the companies used advanced CAD and simulation tools to produce a parametric CAD engine for mountain bike design. 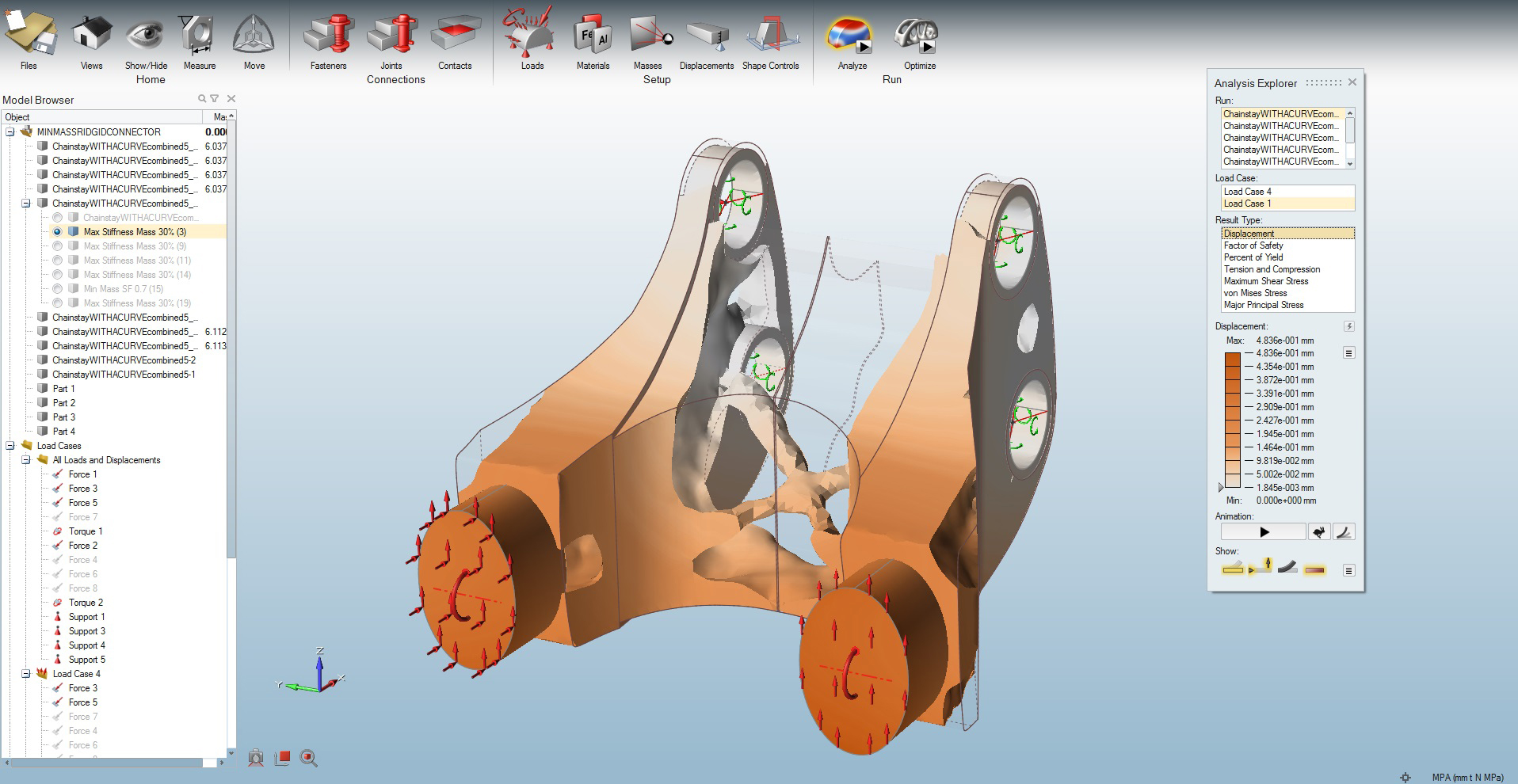 This now sits behind the Robot Bike Co. website, allowing customers to input quickly the required body measurements, and then to generate a bespoke design matching their needs in a quick, easy and automated process.

The production process starts with bespoke CAD geometries produced from bike design software on the Robot Bike Co. website. These are imported into Renishaw's QuantAM build-preparation software, where the optimum orientation for each part is selected and the support structures required for a successful build are added. Within the software the eleven lugs required for each bike can be grouped together, along with their supports, to be produced in a single build.

Once the process is complete, the build plate with the eleven parts attached is removed from the laser powder bed fusion system and heat treated. Then, the individual parts are separated from the plate and from each other. Some of the lugs require finish machining to produce precision bearing features.

These machining processes, which are also completed at the Renishaw Solutions Centre, are set up and controlled using on-machine probing systems from Renishaw.

Finally, the production process is completed with inspection of each part on a co-ordinate measuring machine, again using Renishaw probes. 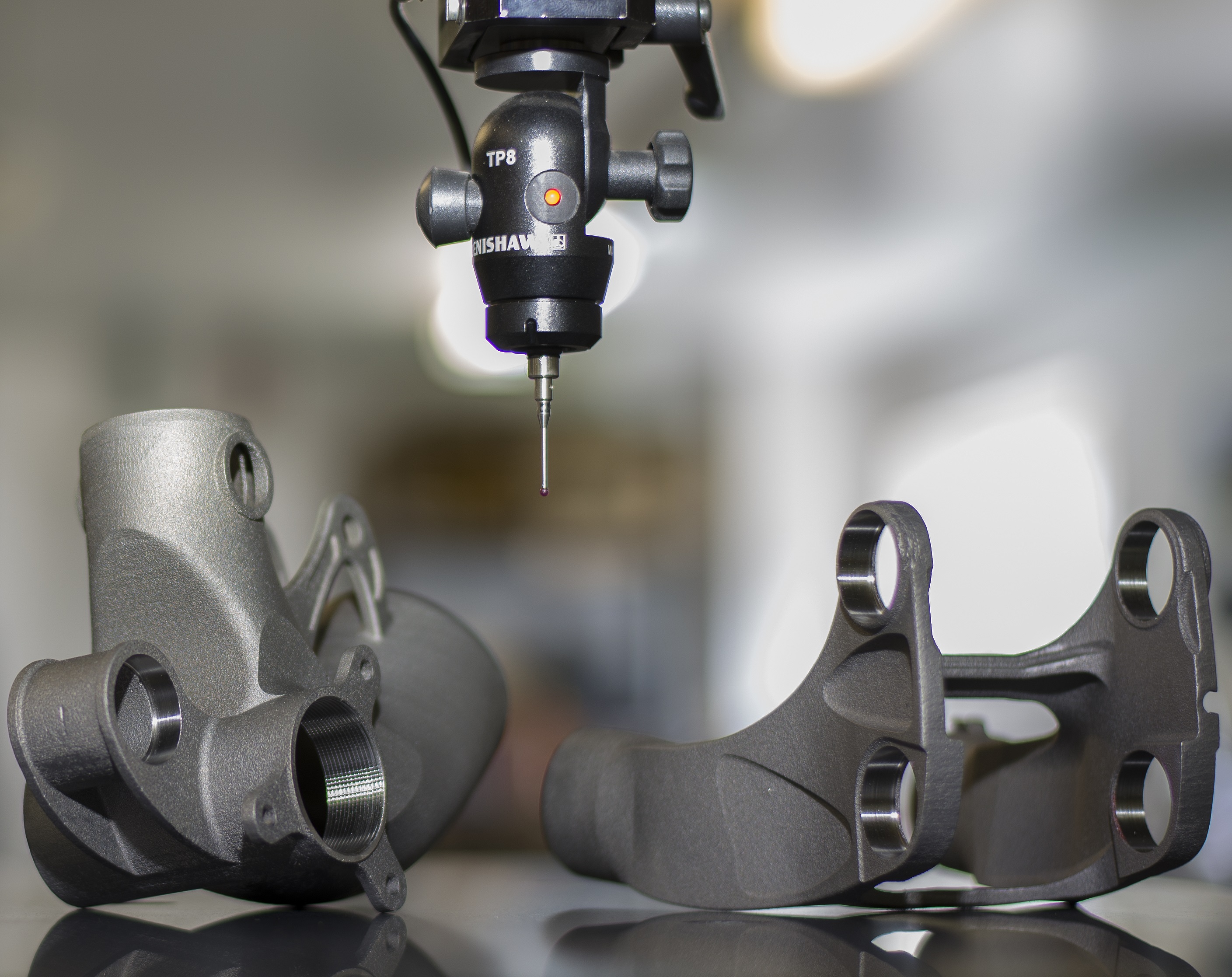 The customised approach to each bike made possible with additive manufacturing, has prompted CEO Ed Haythornthwaite to describe Robot Bike Co. as the Saville Row of the bike industry. The novel design methodology has received extensive coverage in the bike media, including the accolade of ‘most important bike of the decade' on PinkBike, the biggest mountain bike website in the world.

More recently, a sample mountain bike from Robot Bike Co. has been put through a new European EN test regulation that has just been introduced; EN 14766. Accreditation comprises a set of stringent tests that each manufacturer should put their bike or frame through in order to show compliance with the latest regulations. The demanding nature of the tests means that production bike companies often submit four frames, one for each test. 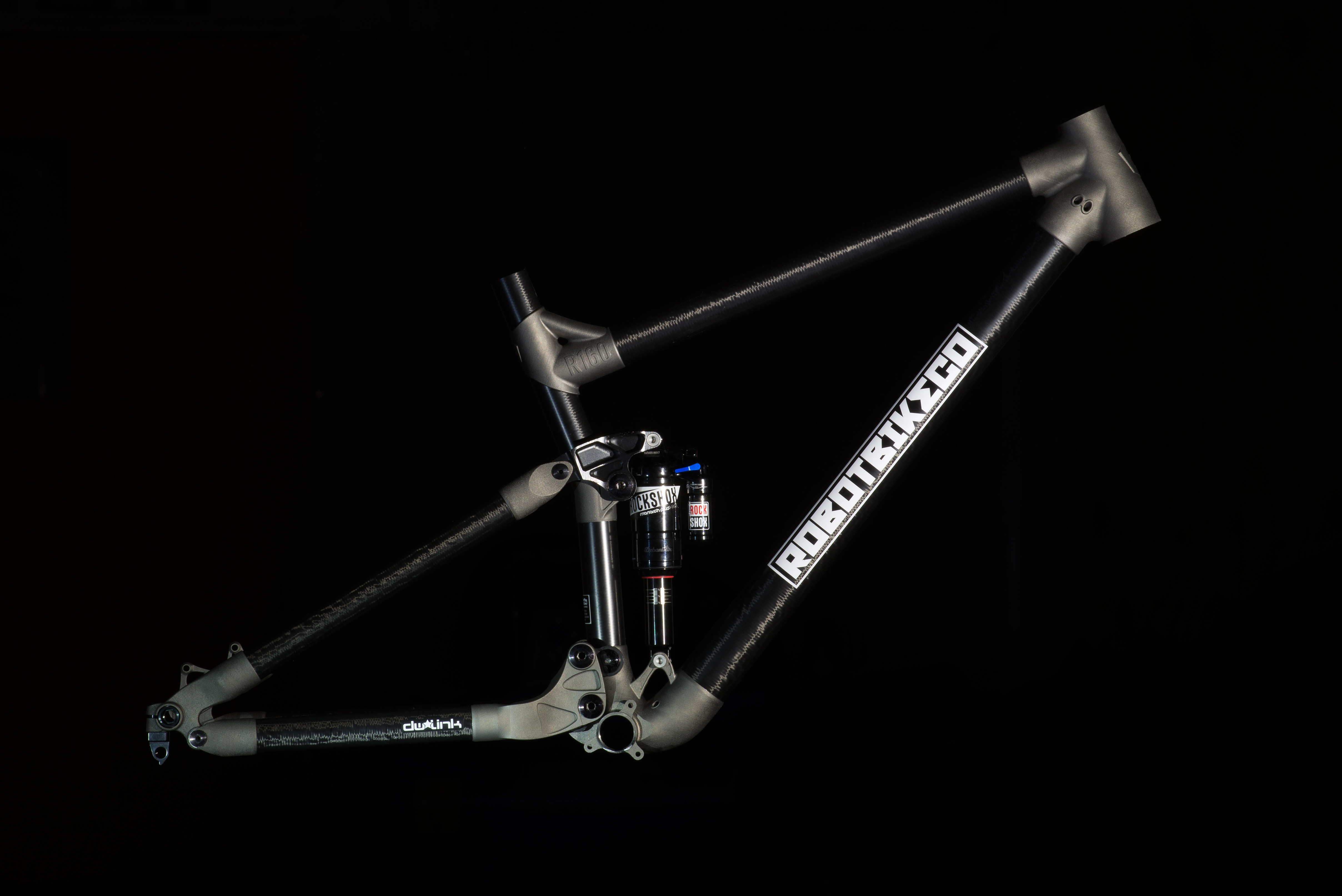 With a limited supply of frames, Robot Bike Co. submitted a single frame for the complete series. The frame passed them all, providing yet more evidence of the success of the design concept and of the strength and quality of the parts produced with Renishaw's additive manufacturing technology.

As well as giving the robustness required, producing the titanium parts with additive manufacturing also allows double-lap shear joints to be used to bond the metal to the tubing, with the tubing bonded both on the outside and on the inside. The use of Renishaw's additive manufacturing equipment means that thinner walls with much greater control over wall thickness tapering can be achieved than if the parts were machined or cast. For the rider, this translates into a strong, lightweight, customised and reliable frame. 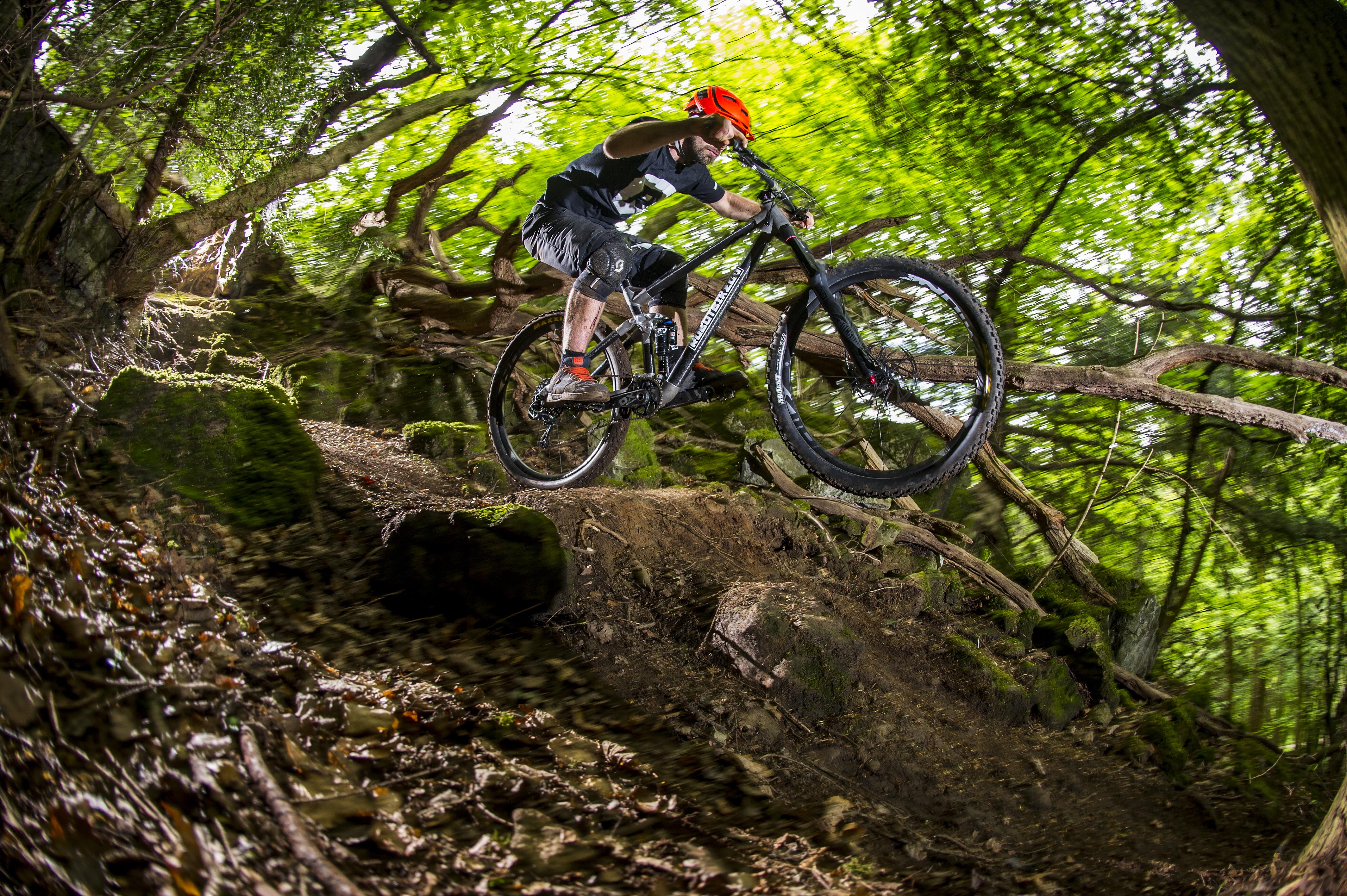