Process-controlled hard turning cell pays for itself in 18 days

Conroe, Texas, USA – Conroe Machine is doing what most machine shops only dream of – hard turning a family of parts around the clock in an unmanned cell that operates a ‘self controlled' process. It integrates a FANUC robot with the Equator gauging system, using Renishaw EZ-IO software to provide simple comprehensive communication functions, for 100 percent part inspection and auto-compensation of a twin-spindle Okuma 2SP-250 lathe. The cell also boxes and palletises finished parts. The company states that the turning cell paid for itself in an amazing 18 days.

Conroe is proof that it is possible for any shop ready to use the talents of today's young automation experts to exploit new technology like Renishaw's programmable Equator, with software and programming developed by CNC Programmer James Wardell and Robotics Technician Jeff Buck. The same automation team have gone on to create an unmanned part measurement/sorting cell for a customer, this time combining two Equators, a FANUC robot, a vision system and multiple lanes of low-profile conveyor. In both applications, the Equator demonstrates the value of programmable comparative inspection by quickly measuring a family of bearing races, doing it cost effectively, and without fixturing, or problems from a shop floor environment.

Conroe Machine is a relatively young company, founded by Murray ‘Tippy' Touchette in 2000, with the expressed objective of producing parts with the best manufacturing technology available. The company grew rapidly to about 150 employees operating in a climate-controlled 65,000-square-foot (6000 square metres) plant. While it is a general-purpose shop, Conroe's location near Houston results in a high percentage of business from the oil and gas industry, principally for drilling components. One of the company's continuously running jobs for the industry is manufacture of thrust bearing races for downhole mud motors. These parts are produced by the thousands each week, around the clock. 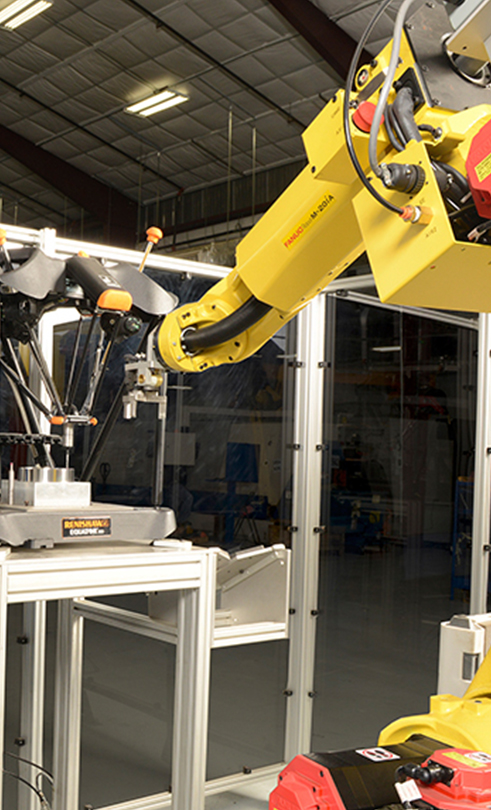 Moving up the automation ladder

The bearings are currently roughed out on four Doosan Puma lathes that originally did both roughing and finishing, and were served by four operators. These machines are now split into two cells, loaded/unloaded by FANUC robots, doing only the roughing operation – these cells were among the shop's earlier automation projects. The semi-finished parts are sent out to be case hardened to HRC 65 at a depth of 0.070ʺ(1.7mm) before the finish turning.

"Our production plateaued at 800-1000 parts per day with these two cells, so 400-500 per cell,” explains James Wardell. “We had a single operator loading the machines and inspecting the parts. However, you can rely on an operator to correctly inspect only so many parts with this kind of volume, and we needed even more output,"

“For our next step up, we conceived a fully automated process for the finish machining, with automatic part loading, post-process measurement, automatic tool compensation, part engraving, and boxing/palletising the parts,” he adds. “We had pretty good ideas for the components of such a system, except for the part measurement technology, CNC type and software for tool compensation. Inspection must be fast to keep up with the cycle times on the parts, which can be as short as 98 seconds. Originally, we looked at white light laser inspection because of its speed, but the parts are too reflective. We also looked at hard gauging and shop-floor CMMs. Hard gauging was very expensive and required setup attention, and the CMM gave no speed advantage. While working with Renishaw on other projects, the regional manager, Sheila Schermerhorn, introduced us to the Equator as a possible solution.”.

For our machining cell, there was no other cost-effective, shop-floor measuring tool comparable to the Equator.

Equator is a low-cost, flexible alternative to dedicated gauging. It uses the comparison method of measuring. A master part with known measurements taken on a CMM is used to ‘master' the Equator, with all subsequent measurements compared to the master. Repeatability is 0.00007ʺ(0.002 mm) immediately after mastering. To compensate for shop temperature changes, the Equator can be re-mastered at any time. The Equator uses an SP25 probe for touch and scanning data collection, at speeds of up to 1000 points per second. Styli are stored in an integral six-port changing rack, and the system is programmed through MODUS™ Equator software. The Equator can be used manually with push-button ease, but in this case it is ideally designed for integration into Conroe's automated systems, with the EZ-IO software for automation.

“We attended an open house at Hartwig in early 2012 and saw the Equator in action, along with Okuma's twin-spindle dual-gantry lathe,” says Wardell. “Apart from being automation ready for parts of our type, the lathe's Windows®-based OSP dual-path control has an open architecture, PC-based, operating platform, which was important in our plan for developing our own auto-compensation software.”

Equator in the automated cell

Wardell and Buck went on to install a cell consisting of the Okuma 2SP-250H, a single Equator, an engraving machine, and a FANUC M20iA 6-axis robot. In practice, the lathe's dual part carousels are loaded with raw workpieces, approximately 300 parts. The lathe's dual gantry loaders feed the spindles and place finished parts on a chute leading to a conveyor for pickup by the robot. The robot places the part on the Equator for measurement and if acceptable, transfers it to the engraving machine, and finally boxes/palletises the finished parts.

“We developed our own tool compensation software to run on the OSP control,” Wardell adds. “This software uses measuring results from the Equator, transmitted in the form of a CSV file, to offset the tools when the part deviates from tolerance.” Machining removes about 0.015ʺ(0.38 mm) from each side of the part, with the tightest tolerance at ±0.001ʺ(0.025 mm) and an 8 microinch (0.5 micron) surface finish. Parts range in size from about three to six inches O.D. “The Equator is easily able to measure within our tolerances with a high margin,” says Wardell.

“Our OD/ID stays spot on, with approximately 5 microns variation on radius. We batch parts by size, so changeovers of chuck jaws and other tooling are minimized. The Equator's speed allows it to easily keep pace with the process. We re-master only once a day, because our shop is climate controlled to 72 °F” (22.2 °C).

The measuring methodology for the parts is surprisingly simple. “We made an aluminum block with a hole in the center which is placed in the center of the Equator fixture plate,” Wardell explains. “We use this to determine our center and set our coordinate system. Each part is placed in the center of that block. We touch to get a center on the part, then surface scan for everything else. We planned the measurement process to work without a part fixture or stylus changing. The robot chooses, through the EZ-IO automation software on the Equator, which measuring program to run for each type of part. We know the critical features we must measure to ensure the part is within tolerance.”

The hard turning cell currently produces about 600-700 finished parts per day, so only one cell is now needed compared to two before. It has now led to a follow-up project involving a parts sorting cell for a customer. Based on a concept sketched out by Touchette, Wardell and Buck are developing a measurement and sorting cell for used mud-motor thrust bearing races.

In oil field service shops, used motors are disassembled, refurbished and put back into service. “The customer was visually inspecting used races to determine if the parts were reusable, and they knew they were throwing away some good parts – and money,” says Wardell. “We wanted to give them a plug-and-play measurement and sorting system that takes human judgment out of the process, so more good races can be salvaged.”

Still being developed when this article was written, Buck and Wardell are assembling a cell that consists of two Equators, a FANUC LRMate 200iC 6-axis robot, multiple lanes of low-profile conveyor, a FANUC iR Vision system and an ATI quick toolchanger for the robot's end-effectors. The vision system tells the Equator what part number is being presented and what measurement program to run. Good parts are subsequently placed on the appropriate conveyor, and bad parts are placed on a scrap conveyor.

“We designed this system to be trucked in for delivery as a unit, and user friendly for the motor shop people – just turn on the power and load parts onto the conveyor,” Buck says.

“For our machining cell, there was no other cost-effective, shop-floor measuring tool comparable to the Equator,” Wardell adds. “And we hope that our venture into cell integration for a customer opens a new business avenue in this area for our entire company.”