Master your CMM with minimal effort and improved efficiency with MODUS Planning Suite.

The MODUS Planning Suite is designed to provide users with a set of automated shortcuts to frequent challenges in part programming, maximising the efficiency of their REVO® CMM head with easy to use specialised software applications. MODUS Planning Suite allows users to plan measurement paths around complex geometry components with minimal effort and improved efficiency.

Until now, users had to define their own paths for surface sweeps using manual manipulation tools to avoid collisions. Now, the new MODUS Patch application delivers the most efficient measurement path with the REVO RSP2 sensor, quickly and easily, with automatic path planning.

Once the selection method is established, edits to the sweep width, direction and other characteristics can be made in the settings menu, if required.

Curves can be defined by the selection of edges from the CAD model or by clicking points on a plane.

Create curve on CAD edges
Curves are defined by either selecting edges of the CAD model or edges of a slice created using MODUS. 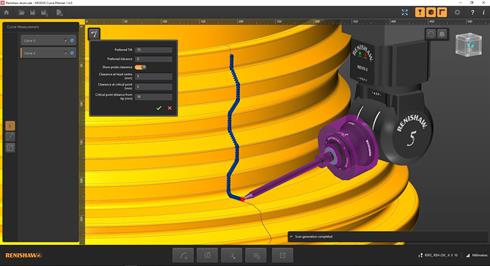 Sketch a curve on a plane
Curves are defined by clicking a number of points on the plane. A spline is fitted to create the path. 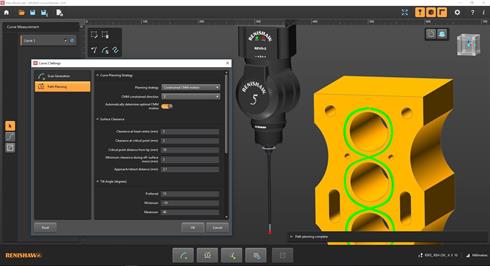 Quick and easy to use

Once the curve is selected, editing parameters such as the scan direction, can be easily done in the settings.

For both methods of defining curves the application incorporates constrained CMM motion, which reduces the CMM axis motion when measuring curves on a plane.

The combination of the axis-constrain feature, together with collision-free motion planning, delivers a significant reduction in programming times for quick and effective curve measurement. 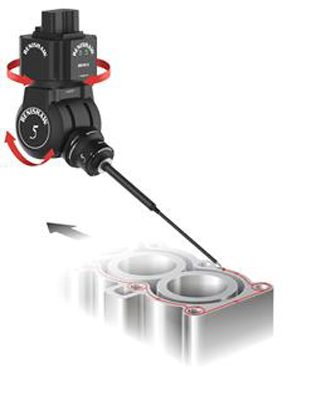 Constraining the machine axis motion to a single plane improves accuracy and repeatability.

Why constrain the CMM motion?

Constraining one or more axis of the CMM maximises the use of REVO® head motion and minimises the motion of the CMM. By constraining two axes and moving only in the one axis parallel to the plane being measured, machine bending is in the plane that's being inspected and as such no error is seen. This presents the opportunity to measure parts quicker or achieve a higher level of accuracy from an existing machine.

For example, when measuring the flatness of a cylinder block sealing face, constraining two axes enables the machine to be operated faster without introducing measurement errors. Ideally, the Z-axis of the machine is used to move the REVO up and down as it has the lowest moving mass and X and Y are constrained. In this case, there are no bending forces, just compression/tension along the length of the quill where it is very stiff. If Z isn't possible, then X (constrained in Z and Y) is the next best as it has the next lowest moving mass. Using Y will still benefit from this method compared to moving the head towards and away from the part as done with traditional 5-axis scans.

Software compatibility
DMIS code from MODUS Planning suite must be run in MODUS. For full capability MODUS 1.9 is required.

CAD models must be in the .Sab format.

Hardware compatibility
The supported hardware combination for this version of MODUS Planning suite is REVO-2 with the RSP2 scanning probe.