With almost 1500 horsepower from just 1995 cc, the KTM Dragster does the quarter mile in 6.7 seconds at a terminal velocity of 316 kmh. In Stanley Kubrick's classic film Dr. Strangelove Slim Pickens was dropped from the aeroplane riding a bomb. If he'd been riding a motorcycle then he would certainly have been astride a KTM Nitro Methane fueled dragster built by Finland based Salakazi Racing. Helping tame the KTM's (barely) controlled explosion is a brace of "bomb proof" Renishaw RM22 compact, high-speed rotary magnetic encoders.

Take a 360kg motorcycle with an absurd power output, a fearless, Finnish gentleman with a reputation for breaking speed records, and things happen fast.

Within a split second, the engine screams to 7,500rpm. Before the spectator has a chance to comprehend what has transpired, the race is over and bike and rider are a quarter mille down the track, braking frantically. In motor racing terms, it doesn't get much simpler. The objective is to traverse the straight line from A to B as quickly as possible.

Jaska Salakari - the first Finn to break the seven-second barrier for the 1/4mile piloting the fastest Super Twin Top Fuel bike in the European Union, owns Salakazi Racing. Since 2000 his speed-obsessed six-man team, a combination of full- and part-timers,- has been running a KTM Super twin powered Dragster of its own design and construction. The 1995cc twin cylinder Nitroduke engine is fuelled with 95% Nitro Methane, gulping 1.1 litres per second of the volatile mix through a Salakazi-designed double fuel-pump. It's about as close to a flying bomb as any earthbound vehicle could get.

In drag racing, reaction times are measured in milliseconds and races are never won with a wildly spinning rear wheel. All the horsepower in the world is useless unless effectively translated into rapid forward motion. For the pilot – or is that 'passenger'? - there's little or no time to think, let alone engage and slip a normal clutch. It's impossible for the rider to accurately determine the rate of engagement needed to provide optimal traction.

Salakazi Racing has equipped its KTM dragster with an automatic Prowork three disc, four-stage clutch fitted with a Prowork digital controller. The controller engages the clutch - according to how it has been pre-programmed - when the rider snaps open the throttle. That's where the Renishaw RM22 encoders with their ability to monitor up to 30,000 rpm come into play. One of the tiny but critical devices monitors the position of the crankshaft in the engine, while the other measures the clutch speed.

Getting the power down

By comparing these values, clutch slippage, traction and road conditions can be determined with high precision. This data is highly coveted by the team and allows the technicians to properly adjust the first stage counterweights in the clutch before the race.

Track and bike conditions vary for every meeting, but the vital data collected and compiled by the Renishaw encoder after every run makes it possible to program the controller for as close to optimum clutch engagement as possible. This provides maximum speed and acceleration with minimal wheel spin during the first few fractions of a second.

Petri Mäkinen – Salakazi Racing's self-confessed "technology guru" – is quick to point out that the Renishaw enabled solution is not the same as a traction control system. Primarily, he says, because the clutch is tuned by set values programmed into the controller before the race against the clock even begins.

"The Renishaw encoder isn't interactively controlling the clutch whilst underway," he explains, "but the data it provides us with beforehand is critically important. We couldn't obtain it – and couldn't preset the clutch - any other way.

We need to read the clutch speed even before the rear tyre completes the first full rotation, to make decisions for engaging the clutch, and the acceleration doesn't happen smoothly. This problem has now been solved and proper filtration has been done to program code. Next season, the Renishaw encoders will also be used to control the ignition advance and, in a couple of years, we are going to use the encoders to adjust cams."

Mäkinen uses the data to put the maximum engine power on the road and propel Salakari to speeds in excess of 300 kmh in less time than it takes to read this paragraph. If past performance is anything to go by, it seems to be working.

The Renishaw encoder isn't interactively controlling the clutch whilst underway, but the data it provides us with beforehand is critically important. We couldn't obtain it – and couldn't preset the clutch - any other way.

The Renishaw RM22 encoder is designed for trouble-free performance in the harshest environments but the Salakazi Racing Team has chosen one of the toughest of places to locate any piece of electronic equipment.

Pointing to the end of the crankshaft on a partially disassembled engine Mäkinen smiles mischievously and says, "This is where we put the Renishaw magnetic actuator. We've located it directly on the end of the shaft. The encoder body is on the other side, in the clutch housing. I honestly think that only a space rocket would be a tougher environment for the encoder."

The RM22 is designed and manufactured by Renishaw's Slovenia-based partner company, RLS d.o.o., and is immune to dirt and debris according to the IP68 standard. However, with a maximum operating temperature specified as 125 degrees Centigrade, Mäkinen elaborates on how the encoder survives the very high temperature inside the clutch. The secret, he says, is placing the encoder in the heavy, machined aluminium housing.

"With a diameter of only 22 mm it was possible to locate the encoder in the clutch housing itself, without compromising the strength of the piece. Clutches can explode," he says, as an aside. "I've seen this happen a few times, so the clutch housing plays an important roll in rider safety. If the encoder were bigger we'd have to re-engineer the solution."

The RM22 features a non-contact, two-part design, eliminating bearings or seals and allowing for rapid, easy installation and removal.

"After each race our mechanics cool the clutch and quickly remove the housing and the encoder," says Mäkinen. "The heavy aluminium body shields the encoder from the heat during the race. Before it ever gets a chance to heat up beyond specs, we've already got it back to the pit garage and removed it."

Once integrated into a complex machine such as a dragster motorcycle, any part or component is only as good as it is reliable. Mäkinen is emphatic in his praise for the Renishaw RM22, a diminutive but vital component, which has proved itself way beyond its published specification.

"Given the conditions, the reliability of the Renishaw encoders is amazing. Without them, we could do nothing more than estimate vital engine and track information," he says. "But guessing isn't good enough if you want to break records." 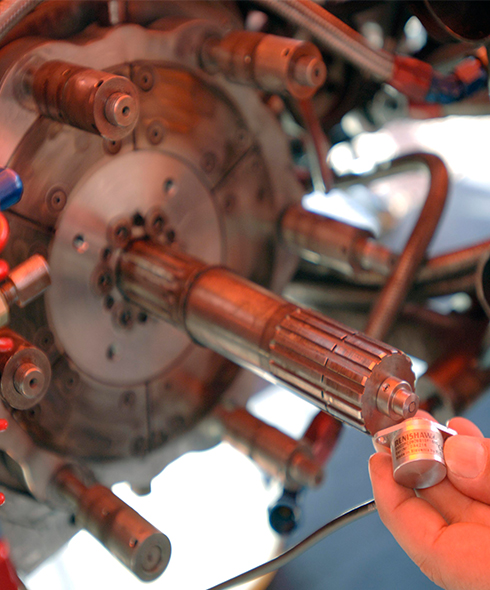