The isolated optical metrology system can detect sources of variable error such as thermal and dynamic effects. By contrast, probes with displacement sensors mounted to stacked axes suffer from latency under changing inertial loads, and cannot detect thermal growth in their mechanisms.

Isolated optical metrology can be explained as a feature of the transducer system. The readheads for each axis are fixed to the body of the probe, and measure the deflection in each direction. Any inter-axis errors caused by the arc motion of each pair of parallel-acting springs are directly measured by the sensor system. Isolated optical metrology systems have no moving wire connections. 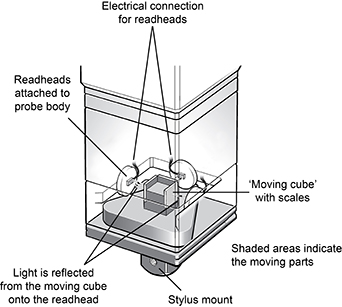