To aid troubleshooting of the UCC2 system, five status LEDs are visible through the front panel of the UCC2.

UCC2 power not switched ON

Power on LED is lit.

If switch-on is successful the UCC2 proceeds to the initialisation/test sequence.

If the initialisation tests fail, then after about 15 seconds three LED configurations are possible, each indicating a different form of failure:

NOTE: These failures are not fixable at the customer's site - if any of these forms of failure are indicated the unit must be returned to your local Renishaw office.

NOTE: The state of all LEDs being off except ‘power on' is the normal switch-on state (as per "UCC2 power switched ON"); it only indicates failure if it remains like this beyond about 15 seconds.

Try switching the controller off, waiting about 10 seconds, then turning it on again. If the problem persists, the unit needs attention.

During system file downloading, the power on LED is lit and the error LED is slowly flashing.

If the system file download fails then the power on, error and system ready (flashing) LEDs will be lit. In this condition, the UCC2 waits for a system restart. Switch the controller off and after approximately 10 seconds switch it on again.

After a successful download the system is ready for use; the power on and system ready LEDs will be lit.

When the servo drives are not active, the servo LED is off.

When the servo drives are active, the servo LED is on.

When the probe is not deflected (in the case of analogue contact probes, not deflected beyond the trigger threshold zone): probe seated LED is on.

When the probe is deflected: probe seated LED is off

Some conditions can arise which mean that it is inadvisable or even dangerous to continue using the CMM servo system. These are known in this document, and in UCCassist-2, as ‘fatal’ faults, and are as follows.

NOTE: That other faults (not classed as fatal) can prevent the CMMs operation. Refer to following sections.

Motors will not engage / re-engage

Either the servo drives will not engage when the controller has been sent the ‘engage' command, or the drives have disengaged automatically and will not re-engage.

After switch on, before the system is allowed to engage, it must be configured for motion (i.e. the machine, servo and move parameters must be sent to the controller).

Any of the “fatal faults” will prevent the system from engaging, in addition the following will disengage the servo motors.

Check each of the above signals using the status flags returned to the host PC, and / or by confirming the values of the actual signals reaching the controller.

UCCassist-2 can be used for further help with this by displaying the system status, the status bytes and the PICS signals.

The amplifier and motor contactor feedback signals can also be examined using the ‘input signals' window.

A PICS STOP signal may originate from an external accessory such as a probe head controller. If the external device is a Renishaw interface it will indicate it is asserting the PICS STOP by illuminating its own stop led but it may be necessary to remove the PICS connections to peripherals one by one to establish which one is responsible.

Remember, a PICS accessory may produce a STOP signal. Renicis can be used to find the condition causing this, which should then be removed.

The CMM will not finish a move at the correct position. This may occur even if it had reported having reached the target position near the end of the move.

Check this by engaging the servo drives with the position loop open and a zero speed demand and check that the machine does drift slowly. Use the power amplifier's offset adjustment to reduce the drift to a minimum. See the following paragraph on forces applied by the machine since it may be difficult to distinguish between these effects.

Forces applied by the machine:

Forces such as those caused by elastic deformation of a cable chain attached to an axis, or by gravity if the machine is imperfectly levelled or counter-balanced, will produce a position error which may vary with the machine's position. Correct the mechanical problem as necessary. Do not compensate by introducing a power amplifier offset to cancel the error.

Move the machine (manually) with the servo drives not energised to search for general or localised high friction. Alternatively, use UCCassist-2 to show the following error as the CMM is moved slowly. High friction will cause a larger following error. Adjust or repair the machine as necessary.

Too large a positioning tolerance:

This parameter, set by the ‘enter positional tolerance‘ command, defines the maximum allowed position error at the end of a move. Adjust if necessary, but note that if this is made too small for the CMM's servo capabilities, it will cause time-out failures during moves. See below!

If the machine has previously performed adequately this is unlikely to be the cause but during the tuning process, this problem could occur. If the position loop gain (defined as the axis proportional gain in the ‘servo configuration' command) is set too low, the machine may not be able to hold position accurately enough.

The integration term in the servo position loop is set when the machine is commissioned to give the best compromise between long-term positioning accuracy and machine stability. If the machine has previously performed adequately, the cause is more probably due to some mechanical degradation.

Controller will not respond to host PC

All or some commands from the user's PC are not executed by the controller. See also the ‘Cannot start a move/scan‘ sections below.

If only some commands are ignored:

If all commands are ignored:

If none of the above tests succeed in solving the problem then it is possible that there is a problem with the communication link between the host PC and the controller. Section 3 describes the IP configuration in detail but in the following sections there some additional checks outlined that you can make.

Seeing the IP address of a UCC2

Follow the procedure in "Configuration of IP addresses", but once you have seen the IP address of the device click on the ‘Exit' button.

Checking the IP address of the UCC2 with ping

You can check the IP address of a UCC2 either by running the IP configuration software, as described in "Configuration of IP addresses", or you can use the command-line utility ping. Ping tests connectivity, so as long as your UCC2 has an IP address and is either waiting for a download or the downloadable is running, you can check that you have a connection to it by pinging it. This is done as follows:

1. Use ipconfig to ensure that your network adapter is not in the “Media disconnected” state: 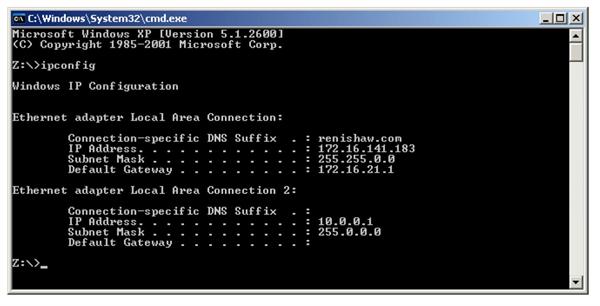 NOTE: The IP addresses displayed here are those on the PC. 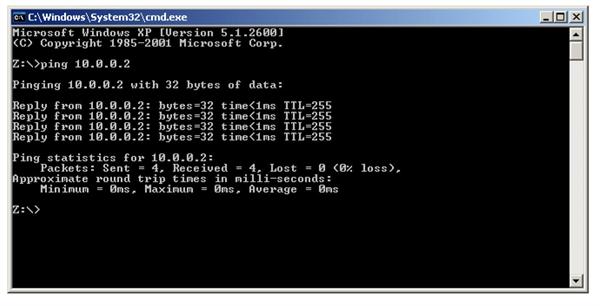 The parts which matter in the output are the replies and “0% loss”. If the UCC2 had a different address then the ping would have looked like the following: 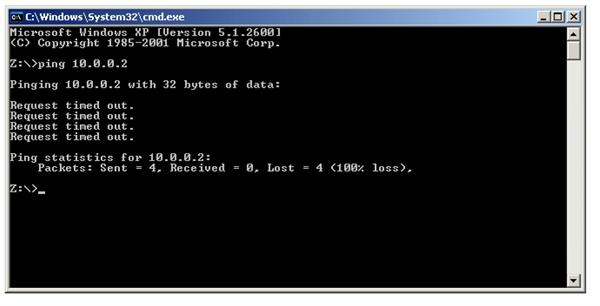 You have to be slightly careful with ping because you can successfully ping yourself! The output of ipconfig (step 1) tells you which IP addresses are associated with your network adapters. Use this information to make sure that you are not pinging yourself and thinking that you have just confirmed your connection with a UCC2.

If the PC is using a VPN (virtual private network) software such as “check point”, it will be necessary to disable the use of this software for the network card dedicated for UCC use. This is carried out in ‘control panel’ / ‘network connections set-up page’.

NOTE: A reboot of the PC will be required before this change is implemented.

The machine stops unexpectedly. The event should be reported as a fault by the user's program and may be identified as a stall on a specified axis. (The condition is reported to the application software by the controller's setting of one of the three ‘axis overdriven‘ flags in a status report).

The machine will stop and disengage the servo drives. The event should be reported by the application software as a ‘scale reading fault' or similar wording. (The condition is reported to the application software by the controller's setting of the ‘scale reading failure' flag in a status report.) The readhead hardware may have reported an error condition, or the fault may be elsewhere.

Any errors detected on the readheads by the UCC are treated as fatal faults which cause the system to disengage. If this happens after the system has been homed it is possible that the scale error will have affected metrology. For this reason if the UCC detects a readhead error on any axis that has it's absolute datum set (i.e. after the CMM has been homed), the UCC will enter “permanent scale error” mode.

When the UCC enters a “permanent scale error” mode the following will happen:

* Actual readout will denote the axis / axes on which the scale error was detected.

If a scale error occurs prior to absolute datum being set the system will still disengage with a fatal fault, but, it will be possible to recover by moving the axis so it is not in error and then reengaging. This allows the CMM system to be commissioned or fault found without the need to continually reboot.

On a new machine, the readhead cables may introduce too large a voltage drop. Check specification for heads and cable, see "CMM readhead input connections".

On a machine which has previously been operating correctly, the fault may be due to:

NOTE: A scale error will cause the UCC2 to enter an error state. This is not recoverable within a metrology application environment. If a scale error occurs, it is now necessary to re-initialise the installation. This is because of the possibility of lost scale counts and therefore metrology being effected.

Timing out during moves or scans

This is similar to the ‘poor positioning accuracy' fault described earlier in this chapter. In particular, the drive friction level and the positional tolerance setting are important factors.

Check that the friction levels have not deteriorated since the machine was commissioned.

The positioning tolerance defines the maximum allowed position error at the end of a move. If this is made too small for the CMMs servo capabilities, it will cause time-out failures during moves. Adjust it using the ‘Enter positional tolerance‘ command 308.

The machine does not respond when given a move command. The controller returns either the ‘cannot start move' or the ‘illegal parameter' status flag with the normal ‘action complete' flag.

When a scan command is sent to the controller, it does not begin the search for the part surface. If this process does not start it returns either the ‘cannot start move' or the ‘illegal parameter' status flag with the normal ‘action complete' flag.