Both A and B-axes are unlocked by a single turn of the thumbwheel in a counter-clockwise direction. The locked (key) symbol on the LCD will disappear. Probes / extensions longer than 150 mm should be supported by hand when locking or unlocking the head.

To lock the head correctly after positioning, support the probe (and extension, if fitted) and turn the thumbwheel clockwise until a positive 'click' is felt. A correct 'lock-up' is confirmed by the appearance of the key symbol on the LCD. To ensure repeatability, it is important to simply support the probe / extension during lock-up and NOT to constrain it. 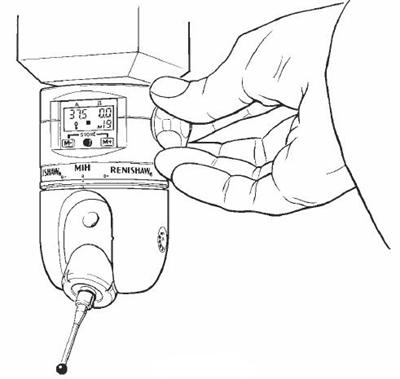 NOTE: Do not leave the head unused in an unlocked position as this will shorten battery life.

Rotation of each axis is achieved against a built-in kinematic mechanism. This provides the user with discreet 7.5° incremental positions so that the head cannot be locked in a non-repeatable position.

The B-axis is positioned by holding the lower housing and rotating until the required position is reached.

The A-axis is positioned by holding the probe or extension body as close to the head as possible and rotating until the required position is reached.

To ensure maximum repeatability, each axis should be moved separately, and should not be moved beyond overtravel positions. 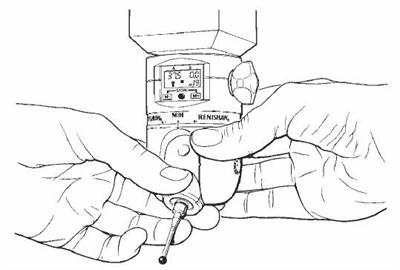 CAUTION: Do not change axis positions by holding the stylus, as this will cause damage to the probe.