Born in Coventry, Warwickshire in 1907, Sir Frank Whittle was an engineer with the Royal Air Force (RAF) and is credited with inventing the turbojet engine. A ground-breaking innovation, his jet engine design was to revolutionise the world of air travel.

Founder of the jet age 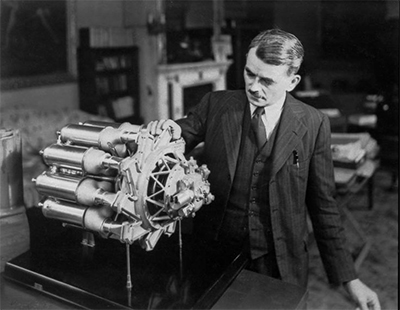 From a very young age, Frank Whittle had a great passion for engineering and flying. Attending Leamington School, he spent hours in the library studying astronomy, engineering and physiology. He wanted to join the RAF.

In 1923 he did so, as an aircraft apprentice, and was commissioned as a pilot officer just 5 years later. As an officer cadet he wrote a thesis arguing that aircraft would need to fly at high altitudes to achieve long range and high speed.

In 1929 he came up with the idea of using a gas turbine engine as a way of producing the necessary jet thrust, the Air Ministry however didn't support the idea. Whittle patented his turbo-jet engine idea in 1930. He became an accomplished RAF pilot and gained a first class honours degree at Cambridge University.

Whittle secured financial backing and air ministry support to develop his jet engine idea in 1936 and just a year later his ‘WU' engine, the world's very first turbo-jet engine was born. With government support, an improved engine, the W1, was built for flight-testing.

By 1941 during the Second World War, the first flight of a jet-powered aircraft took place. Massed production of the W2-powered Gloster Meteor jet aircraft followed just a few years later. A true innovator and visionary, Whittle predicted the development of supersonic air travel. He was knighted by King George V in 1948.