It is strongly recommended that the Renishaw AC2 card is used to interface the SP600M probe. However, should you wish to attempt to power the probe and deal with its outputs by your own means, the following information is necessary.

The SP600M has two 0 V connections, 0 V-power and 0 V-reference. It is recommended that they are connected to a star point in the interface and kept separate from the probe screen as shown below. The 0 V-power is used to power the internal circuitry and transducers. The 0 V-reference is a signal from which the outputs are referenced. 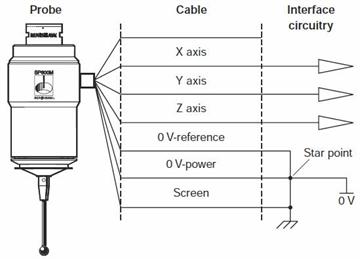 It is recommended that the screening arrangements are based on the Faraday cage principle, i.e. the screen is continuous throughout the system. The SP600M connector shell is connected to the body of the probe.

The power supply to the probe should be filtered as close to the interface output connector as possible to reduce the output noise to <20 mV RMS in the frequency range 0-7 KHz.

The input bandwidth is 700 Hz. The measurement signals should be filtered as close to the interface connector as possible to stop high frequency noise getting into the interface. It is recommended that a first order filter with a 3 dB cut-off frequency of ~700 Hz is used.

The probe cable terminates at the high-density 'D' plug and carries the following signals: 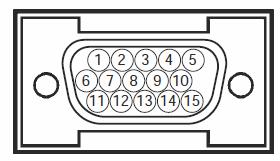